Google and the Birth of the People-Delivery Drone 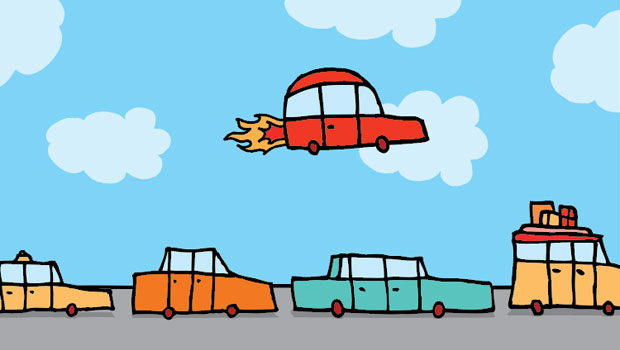 Larry Page is rumored to be building a flying car, apparently dropping a whopping US$100M into the effort. Surprisingly, this actually makes more sense to me than a self-driving car does, because it potentially solves two problems at once: You won’t have to fly the thing yourself; and it eliminates the need for roads for those who commute to work.

If we go to drone delivery and take into account advances in 3D printing for much of the stuff we use, then roads could become like railroad tracks — just used for moving heavy stuff.

I’ll share some thoughts on that and close with my product of the week: a mountable computer case — or wall art — that is really cool.

The Problem With Flying Cars

Amphibious cars have had not just a nasty habit of being slow, but also a tendency to sink like rocks. Technology has improved, and there is a pretty cool fast amphibious jeep on the market, but it’ll cost you more than a boat+jeep would cost you for a similar experience. (Of course, the coolest amphibious car was the Rinspeed Splash. )

The Pal-V One is likely the best flying car on the market, but for US$250K and a motorcycle-like experience you could get a decent plane and use Uber far less.

My least-favorite flying car was made from a Ford Pinto and a Cessna Skymaster. It also cost $250K — back in the 1970s. The folks who developed it seemed to think there was a market for a $250K flying Pinto. Like most Pintos, it had a sad end when the plane part and the car part came apart at altitude.

Back when it was made, many of us wouldn’t drive a Pinto for fear it would blow up, so putting a wing on one (granted, that might haveavoided the fuel tank explosion issue) likely wasn’t a good idea, regardless of price.

Even if you were able to build a flying car like the fictional Corvette on Marvel’s Agents of S.H.I.E.L.D. — I would so buy that car — you’d typically have to drive it to an airport in order to take off, and you’d likely have as much traffic going to and from the airport as you would to work. Given that most of us live relatively near work, you’d probably have to depart from and arrive at the same airport, making the whole idea pretty silly.

With services like Uber, the better choice now is just to get a decent used plane, fly to your destination, and then Uber to your final destination — or rent a car if you prefer. For long trips, it is still vastly easier to take a public plane, even with TSA, unless you are one of the few who can afford to rent or buy your own jet.

By the way, there are some Uber-like jet services, but they’re typically limited to regular runs between local airports and are wickedly expensive if you have to fly someplace else (often less than a charter though).

Ultimately, we want something we can get into at home and then fly directly to work without the airport in the middle.

The vehicles recently proposed look more like drones for people than traditional planes. Amazon and others have been working with the FAA to allow large drones to deliver packages door-to-door for some time, and doing the heavy lifting with regard to the rules, safety and automation that would be needed to deliver people.

The hurdles actually are substantially easier to clear than those for self-driving cars, because there are fewer obstacles in the air, and a central computer control service could keep everything coordinated. You could go over and around obstacles — sometimes even under them — giving the computer far more options for avoiding accidents. They even stop pretty fast and don’t have to worry about pets, wildlife or pedestrians (until rocket belts catch on anyway — and yes, they are coming as well).

Should you think this is a pipe dream, a people drone from Ehang soon will start flight testing in the U.S., and it is designed for an Uber-like service, so you wouldn’t necessarily have to buy one. Ehang showed this thing at this year’s CES, and damned if I didn’t want one even though I don’t drive to an office anymore.

What always surprises me when I see something like this is why the new firm doesn’t buy an older firm that has been working on the problem. For instance, Moller International has had two rather impressive flying vehicles in the works since the 1970s, and you’d think they’d give anyone else working on this a faster start.

Granted, they aren’t electric — but then again, they fly upwards of 200-300 mph, and for that kind of speed gas is OK with me. (These are expected to cost between $250K and $1M — I expect the Page solution will be far more affordable.)

The flying car experience would be like getting into an elevator, with the difference being that you’d tell the computer the address, and the vehicle would get you there the fastest way legally possible, avoiding all the other flying things in the process.

There should be no traffic, except when lining up to land. That 15-mile commute that likely takes you an hour would be closer to 10 minutes.

The nice thing about this latest flying car effort is that these vehicles aren’t even trying to be cars. They are designed as planes only, but they fly you right to your destination a lot more safely than a helicopter can today. In final form, they likely will be in the price range of a high-end Tesla. It kind of makes you wonder why Musk isn’t working on this, doesn’t it? Maybe he is…

It’s something to look forward to — not a car that drives itself, but a drone that picks you up and drops you where you are going with no traffic to fight. Now that is something I would relish.

OK, one of my secret hobbies is building my own computers, and I’ve been looking for a case that is as much wall art as it is a computer case. I have too much stuff on my floor, and the more I can get off it, the happier I am. You can get industrial systems that are wall-mountable, but they look like crap. I was almost giving up hope until I found the Thermaltake Core P5 ATX Wall Mount Case. 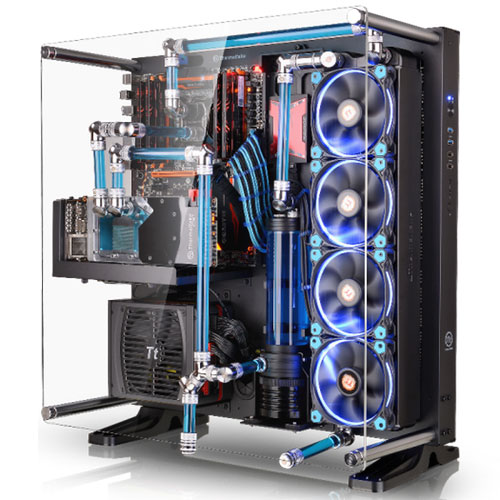 First, this is designed to use the Thermaltake water-cooled system. It currently is on back order, but it will use a regular air cooler (not an out-of- the-box liquid cooling solution from a third party).

The wiring mostly goes into a container in the back of the case, and it comes with a Plexiglas cover so you can see all of the components. It even has an option to mount your video card vertically so you can see it in the window better (I didn’t do that).

It is a relatively easy build for a case with this much going on inside it, and the end result — particularly once the cooling system is installed — is pretty spectacular. It doesn’t ship with a wall mount, but it is designed to work with a strong wall TV mount, which you should be able to pick up for less than $50. The cost for the case itself on Amazon is about $150, and it comes in black and kind of a yellow-green (I picked the black).

Because it was fun to build and it’ll look really cool when the full cooling solution finally shows up, the Thermaltake Core P5 ATX Wall Mount Case is my product of the week.