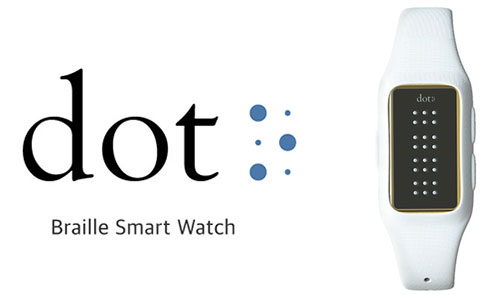 Bonjour and bienvenue to another edition of Gadget Dreams and Nightmares, the column that searches for the best of the week’s gadget announcements while most certainly not skipping out on language classes.

On our la carte menu this week are a smartwatch for the blind, a virtual reality camera, a button to cancel distractions on your computer, and a pet-monitoring camera that dispenses treats.

Regular readers will know that these are not reviews. Nor should the ratings be read as anything other than an indicator of how much I’d like to actually test each — perhaps as yet another distraction from my French lessons.

Dot (pictured above) is a smartwatch that may have life-changing implications. Rather than trying to convey information through tiny text on a small screen, Dot intends to provide visually impaired wearers with notifications through Braille.

Four sets of the six dots that signify characters in the Braille system raise and lower as quickly as 100 times per second to denote four characters simultaneously, though users may opt to slow the watch down to a single character per second.

Wearers can set up Dot to receive notifications via Bluetooth from their smartphone, and the vibration system can alert them to incoming information.

It’s a wonderful idea, and a rare showcase of how the smartwatch concept can bring tangible impact to wearers’ lives beyond fashion accessorizing and fitness tracking. As someone who cannot read Braille, it would be futile for me to try out Dot myself — hence the low rating under the system that’s contorted me into a bind here. Rest assured, I am deeply enthusiastic over the potential of Dot.

Directors will be able to use OZO to view what the system sees in real time through their own headset, while the setup is capable of rendering low-resolution footage within a few minutes for fairly quick review.

With a release scheduled for the fourth quarter, OZO will give filmmakers a little time to come to grips with the system and start creating VR experiences before Oculus Rift — which is on the vanguard of the current virtual reality movement — is released early in 2016. That said, the target market is professionals rather than hobbyists, with a possible price tag in the mid-five figures.

We might actually have VR feature films sooner than later, though I can’t say I’m tempted to try out OZO. I have an interest in filmmaking, but I know with reasonable certainty I’d find a way to appear somewhere in-camera, surely causing me great anxiety. You can blame my clumsiness genes for that.

Rating: 2 out of 5 Spherical Sci-Fis

I am naturally drawn to procrastination when working on my computer. There is an enormous expanse of movies, games, music and fascinating articles on the Internet begging to take my attention away from writing this here column. Saent could be the solution that combats my predilections.

It’s a Bluetooth button that disables apps and websites that could prove distracting for 30, 50 or 90 minutes at a time, with breaks in between. The idea, of course, is to force you to focus on what you’re actually supposed to be doing. Accompanying software aims to help track your productivity during Saent-powered sprints.

What sets this apart from similar tools is the option to add custom commands, so that a double tap, for instance, can open and close your email program, and gestures can open other apps.

I’m curious, and I’d like to try it out. At US$39 for one device, via its crowdfunding campaign, it seems a fair deal. However, I’m sure I’d end up setting up Saent to open Netflix with a double tap or Spotify with a gesture — so perhaps it would encourage my lackadaisical side even more. And it’s not like it can stop me from watching TV either.

Rating: 3 out of 5 Focused Lasers

Through a smartphone app, you can watch and speak to your furred friends. It streams video, though doesn’t record it — but most excitingly, you can use it to shoot out dry food toward your cat or dog. You know, so you can build that bond with your pets when you’re not at home.

I’m not a pet owner, as I say, but I would greatly love to place this on my balcony and shoot food out at the neighborhood squirrels. I’ll try anything to keep them out of my third-floor garden.

Rating 3 out of 5 Thrust Treats