Welcome to Gadget Dreams and Nightmares, the column that — for one week only — is bringing its deep insight on the latest gadget announcements from a small town in Mexico.

On the beach with us this week are a new iPhone, an autonomous vehicle for pizza delivery, a self-lacing shoe, and a necklace that listens to what you eat.

As always, these are not reviews, and the ratings relate only to how much I’d like to use each item. Hopefully without getting too much sand in it.

The iPhone SE packs almost everything from the iPhone 6s into a handset that looks almost identical to the iPhone 5. The only thing that’s really missing is Force Touch.

It’s a smart play, trying to convince iPhone 4 and 5 owners that they can still upgrade to (almost) the latest model without the need to take on a device with a larger screen.

Having had my iPhone 6 for around six months now, I’ve grown completely used to it. I can’t imagine reverting back to a smaller handset. However, in making the leap from the iPhone 3G to the iPhone 5 (yes, I waited that long before upgrading), I felt the same thing — that phone felt just right.

If I had an iPhone 5 that was on its last legs, I wouldn’t hesitate to upgrade to the SE. There’s not quite enough to compel me to switch from the iPhone 6, but I’d gladly try it out.

Rating: 3 out of 5 Size Matters

If you’d asked me three years ago which fast food chain would innovate most publicly with technology, Domino’s might have been my fifth or sixth answer.

Now I’d have to completely rethink that ranking, and Domino’s definitely would be moving up. For one thing, it has adopted a single button that will ship out your favorite order when pressed. And that pizza might make its way to you a little more efficiently with the company’s autonomous delivery vehicle.

DRU — for Domino’s Robotic Unit — is a prototype for the time being, but Domino’s already has security in mind, lest a hungry hacker attempt to hijack your pizza. You can access the contents of the insulated interior (which has both hot and cold compartments) only with a mobile code.

It’s a great idea, and if it’s emblematic of the future of deliveries, I’m all in. I just hope the order’s free if it takes longer than 30 minutes to arrive.

Rating: 3 out of 5 Robotic Deliveries

It’s a long-held dream of the lazy and/or clumsy to have those self-lacing shoes that sparked the imagination in Back to the Future Part II. Now that ambition can be realized, thanks to Nike.

When the Nike HyperAdapt 1.0 detects your heel, it tightens the laces as necessary. You can adjust the fit with a pair of buttons on the side. There eventually may be versions that adjust the fit automatically.

I’m hardly a sneakerhead, but it’s absolutely the style of shoe I wear most often. Comfort over fashion for me, any day. I also contend with loose laces at least a couple of times a day, so a pair of shoes that fit snugly is A-OK in my book.

Health trackers are all well and good, but quantifying what goes into our bodies is a large part of the equation, and one that’s more difficult to quantify. Not so, says a gizmo called “AutoDietary.” It’s a necklace that listens to what you eat, analyzing your chewing and swallowing to figure out how many calories are going down. 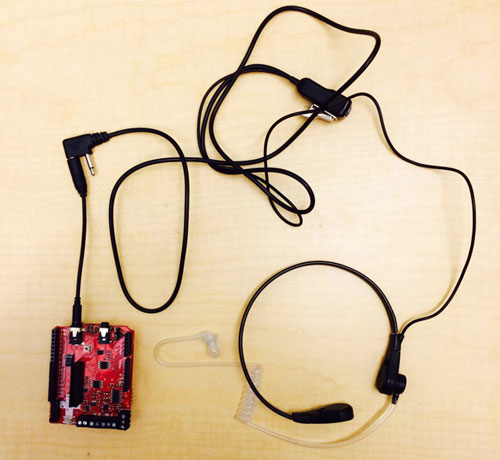 AutoDietary then offers suggestions — like slow down your chewing and swallow, or cut down on sugary snacks.

Naturally, it’s not completely accurate at pinpointing what you’re eating — that breakfast bagel might have 2 percent cream cheese rather than the full-fat stuff, for instance. Still, it just might give you enough food for thought to focus on what you’ve mindlessly been munching on with your idle hands.

I could use something like this in theory, though the necklace design is a little offputting. I’m a habitual slacker, and I either immediately regret an unnecessary snack or forget all about it, which makes a repeat performance all the worse.

Having an app wagging its finger might just help me to cut it out — and help keep me on track to have a killer beach bod for next year’s trip.

Rating: 3 out of 5 Late Night Snacks