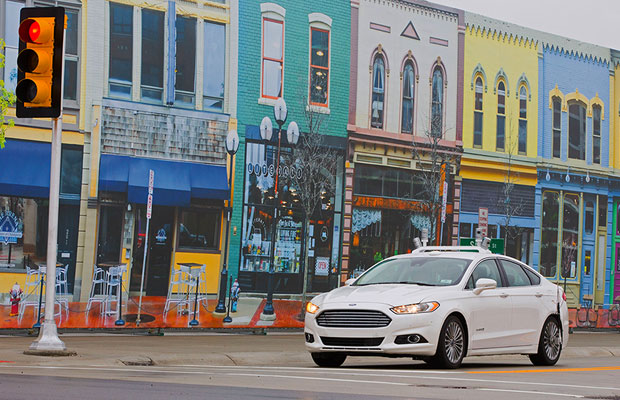 Ford on Friday announced that it will be the first automaker to test its autonomous vehicles at Mcity, a full-scale simulated urban environment that was developed as part of the University of Michigan’sMobility Transformation Center.

The site will allow Ford to test its autonomous vehicle fleet close to its Dearborn, Michigan, headquarters, taking advantage of the diverse roads and realistic neighborhoods Mcity offers.

“The key element in testing at Mcity is the fact that you can create situations that our engineers would rarely encounter through public road testing, even with significant time or miles, and then do them over and over and over again, in order to develop and test the way the vehicle will respond,” said Ford spokesperson Alan Hall.

“Plus, you’re doing it in a safe environment,” he told TechNewsWorld. “Both public roads and closed testing facilities like Mcity play important roles in our development of autonomous vehicles. They both offer unique benefits.”

The Mcity facility opened in July. It was designed to replicate an urban environment, complete with real-world scenarios that would be difficult to re-create on public roads — such as a vehicle that runs a red light. The location includes street lights, crosswalks, lane delineators, curb cuts and even bike lanes as well as trees, hydrants and sidewalks.

It also offers traffic-control devices and construction barriers to help simulate those things that break up the driving routine.

A variety of road surfaces — including concrete, asphalt, simulated brick and dirt — will be replicated, and tests will include maneuvers over two-, three- and four-land roads; ramps; tunnels; and roundabouts.

“The goal of Mcity is that we get a scaling factor,” said Ryan Eustice, aUniversity of Michigan associate professor. “Every mile driven there can represent 10, 100 or 1,000 miles of on-road driving in terms of our ability to pack in the occurrences of difficult events.”

One notable distinction with Mcity is that the weather will vary greatly throughout the year, and this could give Ford an advantage over companies such as Google and Apple that are testing in the Bay Area, where the weather is often the same year round.

“This is absolutely critical and one of the key selling points for the Mcity,” said Praveen Chandrasekar, automotive and transportation research manager at Frost & Sullivan.

“Google has done over 1.2 million testing miles in Mountain View, where the weather is almost one dimensional,” he told TechNewsWorld. “Even the other states where they test at, like Texas, present similar weather.”

By contrast, the rationale with Mcity is the fact that the weather is dynamic, and this could allow original equipment manufacturers to test the performance and reliability of the sensors, especially cameras, which are challenged heavily in terms of performance in snow and foggy weather, Chandrasekar added.

“The other positives are the fact that almost every possible urban and roadside condition, along with road types — gravel, snow, etc. — can be simulated in Mcity, which is as close as it can get to real-world testing,” he noted.

For autonomous vehicles to be successful, testing needs to take weather conditions into account.

“This testing needs to happen at some point, but it is a question of when in your research you want to test the adverse weather conditions,” said Jeremy Carlson, senior analyst autonomous driving at IHS Automotive.

“It would be very ambitious to jump into a snowstorm and hope to get much meaningful knowledge,” Carlson added.

Testing in winter conditions may help resolve some problems that autonomous vehicles would face in white-out conditions.

“The car’s sensors include LiDAR, camera and radar, and the first two are limited to visibility,” explained Carlson.

Snowstorms and even heavy rain can seriously limit the effectiveness of LiDAR and cameras, and while radar is a little more robust, redundant sensors may be necessary to operate in typical winter conditions.

“It is easy to see given some of these issues that autonomous will be deployed for ideal weather conditions long before they’ll be useful in winter driving,” added Carlson.

The Ford Smart Mobility concept includes more than 25 experiments focused on shared mobility, automated driving and the future of connected services running in different cities around the world.

It is about more than just a self-driving car.

“The problem is too much emphasis is being placed on Google because they are directly jumping to Level 4, while other OEMs are taking gradual steps and some even wanting to stop with Level 3,” said Frost & Sullivan’s Chandrasekar, referring to the National Highway Traffic Safety Administration’s autonomous vehicle definitions.

“Ultimately, consumers will view this as a convenient choice they have, and we believe no one will offer automation as the only available driving mode,” he added.

“From the automaker perspective, stakes are very high,” Chandrasekar said, “as there are reliability, liability, cybersecurity and many other challenges to be solved and most importantly not taking the human touch out of the driving experience.”