Fighting Off the Harvey Weinsteins of the World Through Technology

Harvey Weinstein just went from most powerful man in Hollywood to punching bag — and while he deserved this, perhaps greater attention should go toward taking aggressive measures to prevent future Weinsteins — and there will be future Weinsteins.

We need to stop acting surprised when this stuff comes out and instead take stronger steps to prevent this kind of thing in the future. Given how widely known this behavior evidently was, it is hard not to argue that Weinstein’s board also may be responsible, something I expect few other boards will miss.

While we lament the increasing loss of privacy that comes with technological advances, there is a decent chance that future predators can be identified early in their careers and either trained to refrain from this behavior, become unemployable, or be institutionalized far more rapidly.

In short, some of the future technology that may seem scary also could make a lot of people substantially safer.

I’ll focus on what didn’t work with Weinstein, and how tech, applied properly, could ensure the planned extinction of predators. I’ll close with my product of the week: an update on the Surface Book, my favorite high end 2-in-1.

If a union does its job, managers who prey on employees get removed from management or the employees stop working. That is the way the system is supposed to function. If an employee is put at unreasonable risk, which clearly happened a disgusting number of times with Weinstein, the union — in this case, SAG-AFTRA — immediately should move in to protect the employee.

However, the hoops the employee must jump through, particularly with respect to behavior that crosses over into rape, make getting support onerous, as Morgan Spector points out in Jacobin.

This is the case in part because union leadership generally goes to where the squeaky wheel is, and given that women often feel that reporting this type of crime is nearly as awful as the crime itself, many do not come forward. After seeing the SAG-AFTRA process, I’m not sure I blame them.

However, companies increasingly are instrumenting their customers, and it only follows that if unions and leadership want to continue, then they will need to do the same with members. With analytics management, they can then see trends — for example, maybe one race isn’t being employed enough or paid as well.

One of the problems when bringing forward a claim of abuse against someone powerful is that it is one person’s word against another’s. However, powerful predators often are repeat offenders. From the second accuser on, the union should see a trend in the making and be far more able to act.

More important, the union could approach the member who reported abuse with a package that would make it more likely that coming forward wouldn’t be a career-ending decision.

SAG-AFTRA should be working aggressively to destroy the practice of aggressive reprisal and reputation destruction that too often is applied to the accuser by the predator or company management.

By the way, before this is over, I fully expect that people in SAG-AFTRA management will be implicated either as predators themselves or as enablers, so it would be wise for them to get ahead of this proactively.

As we move toward the widespread adoption of augmented reality technology, which uses both audio and video sensors (you basically become a walking camera), the ability to record abuse directed against you or others will become automatic.

Increasingly, AR devices will be designed into eyeware that looks like normal glasses. It also may be embedded into jewelry or designed into some clothing. This means that video records of abuse increasingly will be available, offsetting the he-said-she-said disadvantage. Once AR systems are fully up and running, posting an incident on a media site like YouTube should index everyone in the video shot.

We’ve had face matching and auto indexing on social media sites for some time, and that means, at the very least, that when someone searched on a person’s name, any video record of abuse likely would come up.

That could and should force draconian actions with respect to the individual’s employment, and even motivate a district attorney or attorney general to act on behalf of the victim, particularly if it is a minor. Kids likely will be the first to become comfortable with wearing an always-streaming camera.

As we move to always-on personal assistants, the usefulness of a feature that would allow them to warn you of impending danger seems obvious. We’ve already explored having navigation systems route around areas of violence, and we know that personal assistants share data as they learn.

Deep learning and machine learning are all about setting patterns that then can be turned into action by devices as simple as a smartphone through inference. Since the smartphone is always connected, the ability to identify risks and either warn of danger or summon help automatically already is built into the infrastructure.

As this technology advances, it would be natural to have it do behavior modification as an option for the user, particularly if the user had a lot of assets, an image, or an advanced position to protect. Warning that language had dropped into questionable areas, warning of intoxication, or alerting that someone near you is trending toward a risk could help prevent everything from a physical altercation to a career-ruining joke or public comment.

For someone new to power but not yet able to handle it, or even for some who think they have everything under control, it also could prevent the kind of pattern that resulted in Weinstein’s catastrophe — and I imagine that future boards might require this feature as a condition of employment for some executives with histories.

Eventually, I can see this as a requirement for all top executives, just to better protect the board and mitigate liability — but it also would help keep employees from being abused.

I think technology could go a long way to ensure that unions and human resources departments do their jobs to protect members and employees. Increasingly, we are instrumenting our employees and customers to gain better returns, improve loyalty, and reduce shrinkage — but this same technology also could, and should, be used to prevent abuse.

Another technology that could be useful is virtual reality. If there were a requirement for everyone in management to experience abuse as a victim on a regular basis, which VR could do, they could get a taste of the helplessness, self-loathing and depression that results. It should be possible to build empathy where too little exists now.

Given that some abusers themselves were abused, this wouldn’t be a certain fix — but for those who have no concept of the damage they are doing, it might drive the point home.

My hope is that we can shift from pounding on Weinstein to taking action to prevent future Weinsteins. Fixing problems would be a refreshing change from what we normally do.

Of all the 2-in-1 detachable personal computers, the Surface Book stands out as being the most impressive. The Surface Book 2 now comes in two versions — a 13-inch model that favors its tablet configuration, and a 15-inch version that is a more powerful laptop. 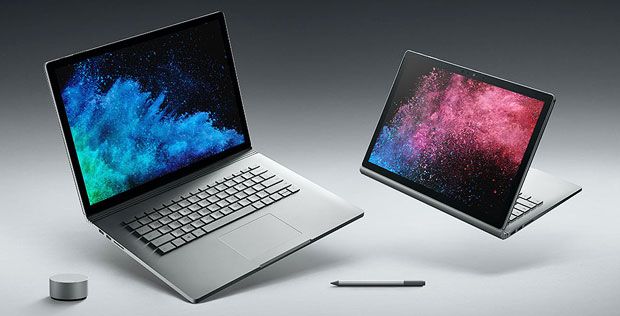 When it is in laptop form and has the performance base for its 15-inch iteration, it comes close to matching a workstation-class PC, but it still has all-day battery life. In its 13-inch form, it has a tablet that is both relatively light and impressively useful, though it could use a few more hours of battery life in that form. It has around five, but a tablet should have at least 10. (However, it can recharge from its base, so that isn’t as bad as it would be for a standalone product.

Even though the two products look nearly the same, the 15-inch favors those who crave performance and largely want the flexible configuration for watching movies or sharing presentations. The 13-inch is for those who want more portability and actually might want to use the tablet configuration of the device. So, the users who would enjoy these products vary a lot in terms of their needs.

This isn’t a cheap date, with the smaller 13-inch product priced at around US$1,500 and the larger, far more powerful offering closer to $2,500. (You can get a lesser performance base, Nvidia 1050 vs. a 1060 in the 15-inch product, which is likely for those who land more in the middle, and at $2K its price is also in the middle.)

Neither is a value box by any stretch of the imagination. This part of Microsoft’s line is for those who value design and fall more into the Audi/BMW/Jaguar class than those who buy basic transportation. While I don’t have one of these yet, I truly love my Surface with the performance base, and it has served me well. This is a nice update, so it’s my product of the week.