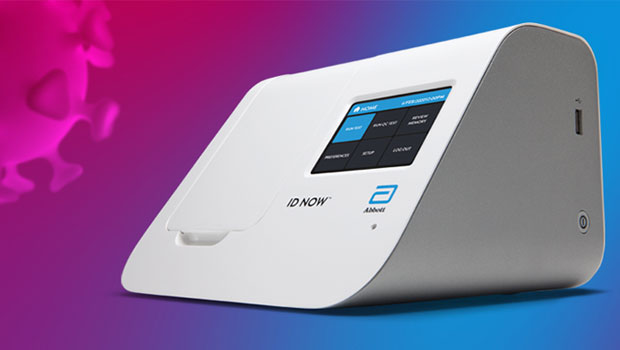 Abbott on Friday announced that the FDA issued emergency authorization for its point-of-care test for the detection of novel coronavirus, clearing the way for widespread use of the system, which provides positive results in just 5 minutes and negative results in 13 minutes.

The test will run on the company’s existing ID NOW platform that provides rapid results in a wide range of healthcare settings, such as physicians’ offices, urgent care clinics and hospital emergency departments. The testing unit is the size of a small toaster and weighs 6.6 pounds.

President Donald Trump showcased the test kit during a Sunday press conference, noting that the Food and Drug Administration was able to approve the test in four weeks. The standard approval process takes 10 months.

“The COVID-19 pandemic will be fought on multiple fronts, and a portable molecular test that offers results in minutes adds to the broad range of diagnostic solutions needed to combat this virus,” said Abbott President Robert B. Ford. “With rapid testing on ID NOW, healthcare providers can perform molecular point-of-care testing outside the traditional four walls of a hospital in outbreak hotspots.”

Abbott will make ID NOW COVID-19 tests available to healthcare providers in urgent care settings in the U.S., where the majority of ID NOW instruments are currently in use. The company is working with the Trump administration to deploy tests to areas where they can have the greatest impact.

The arrival of the Abbott ID NOW COVID-19 test comes a week after the company launched its Abbott m2000 RealTime SARS-CoV-2 EUA test, which runs on the m2000 RealTime System located in hospital and reference labs around the world. Between the two platforms, Abbott expects to produce about 5 million tests per month.

Testing is crucial for controlling the pandemic, the company said, and employing new technologies to help curb the infection’s spread is a top priority for public health officials and healthcare providers.

Abbott introduced its ID NOW platform for molecular point-of-care testing for Influenza A & B, Strep A and RSV testing in the U.S. in 2014. It is a rapid, instrument-based, isothermal system for the qualitative detection of infectious diseases.

The combination of its ID NOW and m2000 COVID-19 testing capabilities will supply about 5 million tests per month. Abbott also is working on a fast antibody test to identify patients infected with the coronavirus, according to reports.

The number of people who actually have COVID-19 is unknown. Evidence keeps mounting that many people who have it are asymptomatic, he explained.

“The challenge here is that the appropriate response will be very different depending on what percentage of the populace will require care,” Lommel told TechNewsWorld.

On the flip side, if widespread testing reveals that asymptomatic carriers are less common than suspected, we will need to take even more aggressive measures. The fatality rate would be higher, and the size of the curve to be flattened would be bigger than expected, he added.

A rapid antibody test is an encouraging possibility for defending against runaway contagion. Such a test, if widely available, could detect previously infected and recovered individuals and further increase our understanding of the disease spread, observed Pinar Keskinocak, president of the Institute for Operations Research and the Management Sciences and professor at the Georgia Institute of Technology.

“These individuals are most likely to have partial immunity to the disease and could return to work, following certain precautionary guidelines,” she told TechNewsWorld.

Even without the rapid antibody test, Abbott’s rapid results testing platform for COVID-19 will be very significant in flattening the infection curve, Keskinocak added. It will enable speedy action for treatment as well as a better understanding about the location and magnitude of current infections. It also would improve the accuracy of predictions about how the disease is likely to spread geographically and over time.

“We have been trying to put out a fire without seeing where the fire was, how big it was and how fast it has been spreading,” said Keskinocak, who specializes in infectious disease modeling and evaluating intervention strategies.

That situation is like flying over a forest covered under a dense fog. Now the fog will lift, giving a much better visibility to mobilize resources and target response efforts, she said.

Abbott’s ID NOW platform will help take down the biggest barrier to testing success, which is turnaround time, asserted Erika Gray, Pharm.D., cofounder of Toolbox Genomics. Speed to diagnosis or confirmation of COVID-19 is critical.

“Many hospitals do not know if a patient is positive for two or three days because of the testing backlog. As a result, the patient has to be treated as a high-risk patient with high resource needs until the test comes back,” she told TechNewsWorld.

An even more critical element in the rapid testing processes is the ability to test potentially infected patients in the field, Gray suggested.

“I’m not sure if this is possible, but ambulance [staff] might be able to carry this test with them and test people in the field. EMTs can test glucose in the field,” she noted.

Abbott’s rapid testing platform also will bring a new dimension of fast care to people who lack symptoms and remain at large to spread infection, Gray noted. Drive-through testing facilities and emergency rooms will be able to provide results swiftly, speeding up triage and medical care.

Cities need to be able to test their populations randomly, instead of limiting tests to people who have certain symptoms. Point-of-care testing could make that a reality.

“We know the majority of people with the virus are asymptomatic, but only people with COVID-19 symptoms are being given access to the test,” Gray said. “Rapid point-of-care testing is critical.”

“It may be worth doing serial re-testing to ensure people do not contract the virus again. We don’t know how this virus behaves, as it is novel, and we don’t know if people can be re-infected,” she explained.

In the long run, both immunization programs and investigation into the best therapeutic care for victims are needed, urged Lommel. Even with widespread testing, it is likely that COVID-19 will continue to exist at very low levels in the background, hidden in the noise of “flu-like illnesses,” most of which are never identified.

Also, we need to know the accuracy of the Abbot ID NOW COVID-19 test, added Lommel. It needs a very low false negative rate. If it says that someone is disease free, we need to be reasonably sure that is true. Otherwise sick people would go on to infect others.