Consumers have embraced digital media, primarily content such as music, photos and video. They generate their own content, transfer their analog data to digital formats, and download media from the Internet.

The percentage of U.S. households with platforms for image and video capture, as well as music playback, has grown significantly in the past three years. At the same time, the number of “media hubs” — consumer electronics devices that connect to premium content services and can receive and/or store it — has grown tremendously.

As these consumer electronics devices link to a growing number of Web and television-based premium content services, they’ll be shouldering more of the burden for storing this content, just as they are increasing the storage needs of the household. Digital media stored on multiple devices will grow fourfold by 2012, reaching nearly 900 GB.

We are not talking about just mass-market media, either. A portion of this digital content holds significant emotional value, making the backing up of these files even more imperative. 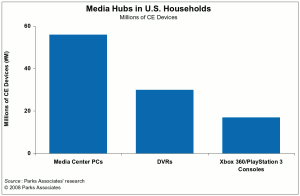 However, while consumers indicate concern about losing data and media files (due to computer glitches or catastrophic events such as floods, theft or fire), they’re doing very little about it. Today, there is a wide disparity between the 40 percent of consumers who indicate that they are interested in properly backing up their content and those actually accomplishing this task.

Only about one in 10 households is actually backing up its data on a regular basis. More often than not, “backup” is the infrequent burning of a CD or DVD — not exactly the most robust way in which consumers can safeguard their precious memories and high-value downloaded or ripped music or video files.

Consumer storage solutions aimed at simplifying backup and the safekeeping of data and digital media will be essential to convincing more consumers to adopt in-home (direct-attached storage, networked storage, and home servers) and online or network-hosted solutions.

The categories of consumer storage solutions aimed at adding backup and safekeeping of consumer data and digital media include the following:

A second major catalyst for the development of new storage solutions is the growing need by consumers to better aggregate, organize, stream and share their digital media. With large libraries of family photos and video, consumers want a means of sharing files as well as storing them. Frequently, this sharing comes in the form of online sites where the consumer can upload files and then grant access to friends and family.

With most NAS (network attached storage) devices, users can view, upload and download their files via the Internet from any location, which is a highly desirable feature among NAS purchasers. More than 50 percent of consumers who bought an NAS device in 2007 indicated that its ability to share content was a significant driver in their specific product purchase decisions. Extending up the ladder of sophistication, home servers can also deliver content to other devices throughout the home, making content available on home entertainment networks for uses such as viewing digital pictures on a television screen.

The market for solutions aimed at data backup and safekeeping and content sharing will be growing robustly over the next few years. The solutions in this category include:

Currently, most storage solutions reside in the personal computing section of consumer electronics stores. While this placement captures those customers looking for data backup solutions, it misses potential buyers wanting storage for other devices or media. Retailers need to move these devices from the computing aisles to either the music section, the home entertainment section, or the camera section in order to obtain the desired attention from their targeted audience.

With storage devices in different target areas of the store, manufacturers and retailers can modify the marketing message to attract different consumers. For instance, if a retailer places a storage device in the home entertainment section, then the focus of messaging can migrate to video storage and streaming capabilities. Targeted marketing provides an opportunity for positioning brand names in the consumers’ minds as well. Only 20 percent of consumers indicate that brand name played the most important role for purchasing an NAS device. There is room for companies to build a reputation and become frontrunners in the market — with proper positioning.