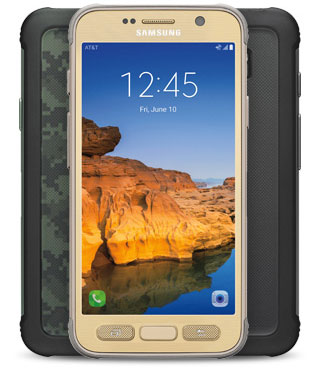 The water- and shatter-resistant Samsung Galaxy S7 Active on Friday became available exclusively from AT&T through its website or at its brick-and-mortar stores.

Buying two Galaxy S7 Active devices on the AT&T Next plan also will get purchasers up to $695 in bill credits over 30 months.

“Getting the S7 Active is a pretty good get for AT&T, as the device is, essentially, Samsung’s flagship Galaxy S7 in an integrated ruggedized case,” noted Ken Hyers, a research director at Strategy Analytics.

The S7 Active “is a premium smartphone in a segment that’s dominated by lower-end ruggedized smartphones like Kyocera’s Hydro,” he told TechNewsWorld. “Samsung pretty much has the high end of this segment to itself.”

The S7 Active is the first in Samsung’s Active family to include a fingerprint scanner, which is embedded in its home button.

It has a 4,000 mAh battery that allows 32 hours of talk time, according to AT&T. The battery can charge fully in less than two hours.

The S7 Active’s battery has Adaptive Fast Charging and Qi Wireless Charging, but as with the Galaxy S7 and S7 Edge, it reportedlylacks Quick Charge 3.0 support.

“The two standout aspects are the hardening and the huge battery,” said Rob Enderle, principal analyst at the Enderle Group.

“Both of these should be reasonably well received if the phone doesn’t turn out to be annoyingly heavy as a result,” he told TechNewsWorld.

The added weight might be a limitation for customers who are very weight conscious, Enderle said, but, other than that, “this is arguably, on spec, one of the most durable phones in the market.”

The S7 Active is shatter-resistant for drops onto a flat surface from five feet or less, AT&T said, and it has been rated at IP68 for water resistance in up to five feet of water for as long as 30 minutes.

The Virtues of Exclusivity

AT&T collaborated with Samsung on development of the S7 Active’s design.

Active millennials are a major target demographic, Jude told TechNewsWorld, because “the extra capacity and hardened structure lend themselves to an active outdoor lifestyle that enables lots of media capture — pictures and video.”

Toughness is increasingly important to consumers, he pointed out. “As carriers have done away with device subsidies, people tend to keep their devices longer, so durability has become an issue.”

Ruggedized smartphones accounted for 3 percent of all smartphone sales in the United States in 2015, according to Strategy Analytics’ Hyers, who noted that Samsung’s Active line “made up a healthy proportion” of that.

“The performance of the Active line has been good,” he said, “hence Samsung’s decision to continue to introduce a new model each year.”