Droid Scan Pro PDF, an app from Trans-code Design, is available for US$4.99 at theAndroid Market.Has anyone else noticed that you rarely receive a copy of hotel room-service receipts? Why is that? It hadn’t really bothered me that much over the years — despite a niggling feeling it should — until an incident recently where the dollar amount I had signed for clearly didn’t match the checkout bill. In this case, the hotel had added a service charge after I’d signed — and after I’d added a tip to the receipt. Dodgy stuff.

I caught them because I specifically remembered the total on the receipt as I was signing it. Including tip, it was a similar dollar amount to my regular check at a Thai eatery that we go to. The amount on the hotel checkout bill was jarringly a few dollars more at checkout. 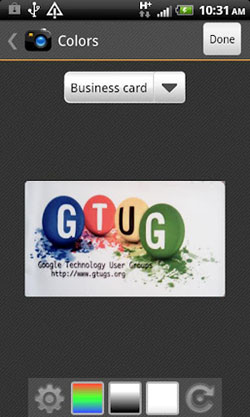 A query at the hotel desk for a copy of what I’d signed quickly got the entire room-service meal comped. A facsimile was never provided. However, this incident jolted my partner and me into investigating solutions.

“You paid how much for a hamburger!?” What if we simply took a smartphone photograph of every room service bill as we signed it? The phone is usually right there. We vowed to forever photograph receipts in hotels from that moment forward despite the obvious unmanageability of the archival process — an awful mess, most likely, with hamburger receipts inadvertently shared online with Facebook friends in lieu of pretty sunset scenes, and images of pine-capped mountains flourished demonstrably at overworked desk clerks as corroborating evidence of shenanigans by their bosses.

Or better yet, we thought, what if there were an app you could use to scan and manage the receipts? Back at home base, after an Android Market browse, entered stage-right the $4.99 Droid Scan Pro PDF from Trans-code Design.

Opening the unintuitive UI, you’re presented with a contextual help screen that includes some explanation of how the Optical Character Recognition works — OCR happens by default when uploading JPEGs or PDFs to the cloud only.

I was pleased to see that the app would indeed allow uploading to cloud-based storage — in this case, Google Docs.

I grabbed a supermarket receipt from my back pocket — for obvious reasons, no room-service receipts came to hand.

In this case, the supermarket receipt had an equally exorbitant, hotel-like-priced single tomato listed for $1.52, so it would suffice just fine.

Scanning: If at First You Don’t Succeed

Scanning involves operating the phone’s camera from within the scanning app. Many of the somewhat-creased receipt’s characters were recognized, but not all.

Disappointed, and to be fair, I also tried OCR on a crisp letter-sized Times Roman Microsoft Word document that was lying around, because not everyone wants to just save receipts for catching iffy hoteliers. Again, the OCR did not capture the entire document.

To be even fairer, I loaded the app onto a bulky tablet, defeating the object of the exercise somewhat, and tried the Word document again. This time almost all of the document was recognized — but frustratingly, a few lines were still clipped and missing.

App features that separate Droid Scan Pro from others include perspective correction and document size-detection.

However, there are cheaper — and free — apps out there that may be worth investigating.

On checking the phone’s Gallery, I was a little disappointed to see that the scans I’d made were being stored in the regular library, along with various sunsets.

For me, the point of scanning and uploading to the cloud was to separate photography from boring old receipts.

This functionality could be used post-OCR uploading to remove the scans from the Gallery.

Expunge could also be useful for budding politicians and others whose retention of certain R&R records could come back and haunt them at election time.

Keeping Your Devices Powered While on the Road