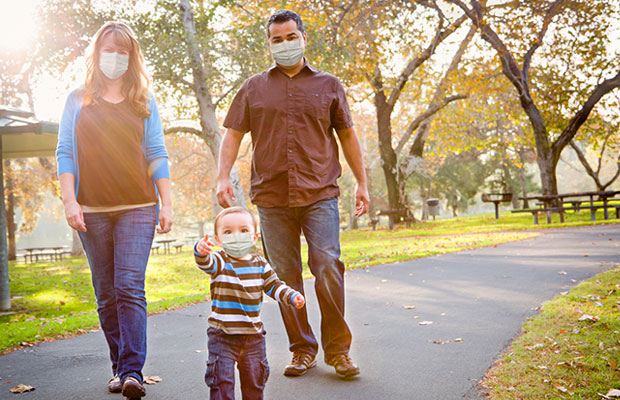 Never, in most of our lifetimes, have all corners of society collaborated to address a single grave threat as they have done in the fight against COVID-19. While epidemiological controls compose the first line of defense, technology is growing into a supporting role. So great is the potential for technology to help combat the pandemic that tools are being contributed even from unlikely places.

Last month, the Department of Homeland Security, through its Science & Technology Directorate, released a simple web-based tool to help predict the decay rate of coronavirus in the air.

The tool, entitled “Estimated Airborne Decay of SARS-CoV-2,” accounts for the ambient temperature, relative humidity, and UV index in an outdoor environment to determine how much exposure time is required to “inactivate” (that is, render unable to infect cells) certain proportions of aerosolized coronavirus. For any given combination of those three variables, the tool outputs the amount of time until 50 percent, 90 percent, and 99 percent of the virus particles are inactivated.

The tool is openly available on the DHS website for anyone to use, an intentional choice in presentation to allow it to reach beyond the directorate’s usual audience.

“It’s a critically important part of the scientific process, to make sure that your science gets peer reviewed by other experts in the field, they evaluate the methods, and so we look to get all of that information published,” said Dr. Hough.

“But when we do publish in scientific journals, the audience is largely other scientists who are working in the same fields, and so what we really wanted to do is to be able to operationalize the data, and get it into the hands of people who are making decisions today and now, rather than waiting for them to see the paper, [see it] show up and in searches, and have to go through it,” he added.

This tool is only the latest interactive offering by the DHS, joining an earlier one which predicts coronavirus decay rates in indoor settings. Both tools feature intuitive interfaces and run on simple web technologies that work smoothly in practically any desktop or mobile web browser. They even link to one another, allowing users to quickly pivot between the two.

As accessible as its presentation format is, what makes the airborne decay estimator so effective is the rigorous study that produced the model that it operates on. This underlying model was derived from data collected as part of a DHS Science & Technology Directorate experiment, which Dr. Hough took part in conducting. Published in the Journal of Infectious Diseases, the experimental results determined that UV exposure has a significant impact on coronavirus inactivation.

Additionally, it concluded that while humidity by itself had no statistically meaningful effect on decay, it had a slightly accelerating effect when combined with heightened UV levels. The study was undertaken to measure factors that, prior to its publication, had only been measured separately.

On first blush, it may seem out of place for DHS to pursue research like this, but aside from the fact that the world needs all hands on deck to find a cure for COVID-19 as soon as possible, it is actually right in the agency’s wheelhouse. The Science & Technology Directorate alone conducts experiments like the coronavirus airborne decay study all the time. Primarily, these are carried out at the facilities of the directorate’s National Biodefense Analysis and Countermeasures Center, or NBACC.

The NBACC operates a laboratory rated for biosafety level four (BSL-4), a corpus of containment and safety protocols expressly intended to study the most dangerous biological agents imaginable. Insight from studies at NBACC is then used to prepare the U.S. and its allies to foresee, prevent, and respond to biological warfare and terrorist attacks.

DHS’ Science & Technology Directorate, and the NBACC under its auspices, has pivoted much of its focus to the pandemic. Nothing reflects this better than the information neutron star that is the Master Question List. As the name suggests, the Master Question List (MQL for short), contains all the questions that one could conceivably ask regarding COVID-19, or the virus that causes it, SARS-CoV-2.

According to Dr. Hough, the MQL format was devised in response to the emergence of Ebola in 2014, and immediately proved to be an indispensable format for rapidly developing an up-to-date picture of epidemic response, which is why it is being leveraged in response to COVID-19.

“What it does is it divides what we need to know about any infectious agent, or toxic agent, into about 15 questions, and those 15 questions are really big, broad areas,” Dr. Hough said. “But we use that as a structure [for] quickly capturing what we know and what we need to know, and the initial versions of that document also had who’s doing what, in those spaces that we know of, and who’s capable of doing them, so that we can get folks to interact with other laboratories.”

Along with providing answers to as many of these questions as possible, the MQL meticulously cites every answer, whether from the DHS’ own work or that of a domestic or international partner, sorts the information by topic, and then clears all the information for public consumption. As one would expect of a document that provides essential and current knowledge, it is updated frequently. In fact, so much has been contributed to this formidable repository that it quickly exceeded its page count target, if not expectations.

“The original intent was to keep it at three pages, and there’s just so much information that we wade through, and that we keep track of, that it keeps growing every week,” Hough said.

To give a sense of scale, at last check, the MQL clocks in at around 50 pages.

True to form, the researchers at the Science & Technology Directorate aren’t easing up efforts to revisit or refine the airborne decay rate study. From the experimental conception and design phase that kicked off in January, the experimentation on aerosolized coronavirus particles saw its first batch of finalized results in May, and researchers already have plans for follow-up tests which will likely extend their work for another month.

“We’re looking to collect information that will take that both higher and lower, because there are different spaces at different temperatures, and different humidities and different solar irradiances,” said Hough. “All of our research is ongoing and as we collect more data and add more data to the body of data we already have, we’ll continue to expand the usefulness of the tool.”

The most significant of the study’s contributions to the public, by far, is not the tool’s source code or APIs, but the decay rate modeling formula. Anyone with modest command of mathematics can wield the equation that the results produced and incorporate it into whatever applications they could possibly wish, as Dr. Hough describes.

“We’ve made the formulas that underlie the calculations that are happening available on that page, and in the publication, so anybody who wants to utilize or leverage it [can do so] — I can create an Excel file in a few minutes that can incorporate those calculations,” Hough explained.

For an unassuming government-driven public health policy aid, the web tool has already received a fair amount of attention. It has garnered more than 28 thousand page views since its debut on June 12. Beyond that, the page got a boost from Sen. Marco Rubio, R-Fla., in a tweet he sent out on June 27.

The ⁦@DHSgov⁩ has developed two calculators that can help estimate how long #Coronavirus will survive based on temperature & relative humidityOne is for virus on surfaces:https://t.co/OzoBY1ULx8The other for airborne viral droplets: https://t.co/cNffAJSzW0

The tool has also been vindicated in the intention of its creators to arm policymakers to best protect their constituents. Grateful and affirming sentiment has reached the Science & Technology Directorate from local and state leaders across the United States.

“I think it’s been fantastic: We don’t get a lot of comments directed at us, but we have received some comments from different users,” said Hough. “So, I think there’s a lot of interest in understanding what happens to the virus when somebody coughs in the air, and how that impacts whether we should be inside or outside, whether it’s safe to congregate or not, and it helps it helps define, again, how do we treat those spaces, and how do we protect people who are in them, or have to be in them.”

Small as each one might be, every piece of practicable knowledge on COVID-19, like the kind that this new digital tool presents, sheds more light to guide us through this difficult time.