Devialet Wants You to Experience an Emotional Sound Implosion 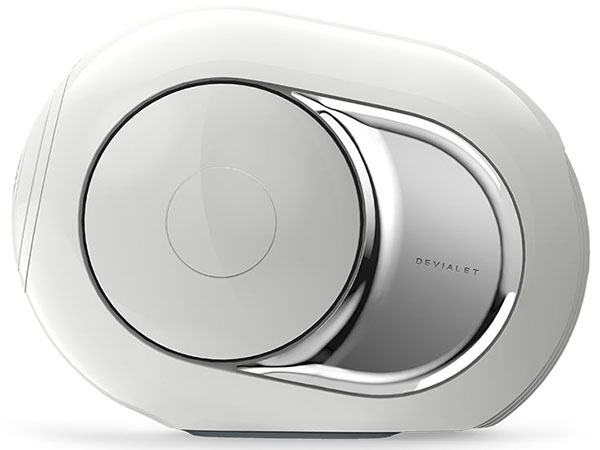 Devialet, which is based in France, will begin fulfilling U.S. preorders for the hi-fi speakers this September.

Echoing the strategy that ultimately earned Beats a spot on Apple’s team, Devialet is providing a step up for audio enthusiasts who want higher sound fidelity.

Ghost in the Machine

The implosive sound of what its creators call “the best piece of sound equipment in the world” comes from two pieces of proprietary technology. In all, the hi-fi speaker is the result of more than 10 years of research and development.

The Phantom draws up to 3,000 watts in the Silver model, and its components introduce no noise — including distortion, saturation and souffle — into the output.

At the Phantom’s core, Devialet’s proprietary ADH (analog digital hybrid) processing technology merges digital and analog amplification, harnessing the complexity of the former and the compactness of the latter. Inside that system, a SAM (speaker active matching) unit handles the processing.

The very design of the Phantom plays a big role in what makes the speaker revolutionary and helps it deliver that emotional and implosive sound Devialet touts. The SAM system conducts the rhythm of the Phantom’s beating heart, its BHI (heart bass implosion) system.

The vacuum-sealed BHI unit is pressurized to levels suitable for a rocket launch, which enabled the Phantom’s developers to concentrate the acoustical density the speaker delivers and output sound as good as or better than much larger units.

The Phantom integrates with a Dialog Hub that enables consumers to create a stereo setup, and to communicate with the speakers via Devialet’s Spark companion app.

A lot of people would buy Phantoms if they heard the speaker in person, but corralling those consumers and getting to test the product is one problem Devialet will have to solve, according to Rob Enderle, principal analyst at the Enderle Group.

It’s an amazing speaker, but it isn’t a cheap date, he said.

“Don’t get me wrong, I actually think these speakers are worth the money — they are truly amazing,” Enderle told TechNewsWorld, “but at this price point, getting people to see — or more accurately, hear — the value will be huge impediment to sales.”

For stereo sound, you need at least two Phantom speakers, Enderle pointed out. That’s at least $2,000 per speaker. The Dialog hub for the units will add another $325 to the grand total.And there’s another problem.

The Devialet Phantom is a two-speaker system “at a time when we are promoting seven speaker systems, plus subwoofers, for theater sound experiences,” Enderle said.

“Granted, people seldom set these up right,” he acknowledged, “but typically, two-speaker systems are sold for outdoors or small rooms — and with this kind of power, this is a large room system and wouldn’t survive outdoors.”

The Market for Hi-Fi Audio

Celebrity-backed Tidal, an HD music streaming service, has gotten off to a rocky start, and Devialet could find itself suffering through similar struggles.

It’s often the high price point of hi-fi music equipment and services that make the offerings poor value propositions for many consumers.

The problem with hi-fi audio and video hardware and services is that these products have proven to fit imperfectly in the lives of most consumers, noted Glenn Hower, a research analyst at Parks Associates.

Consumers generally rely on streaming technologies for music and video content, he said.

“With music especially, consumption is centered on mobility, since most use cases for music are passive in nature — like working out, doing chores, driving, Hower told TechNewsWorld.

“I envision most mainstream consumers will continue to listen to music on general-purpose devices like smartphones. As far as video goes, streaming video along with hi-fi audio is a difficult prospect.”

While hi-fi audio may seem a sensible pairing with ultra HD, streaming both is infeasible for now, according to Hower. UHD alone hasn’t hit its stride yet, due to the robust bandwidth required to deliver the weighty content into living rooms. On top of that, a UHD TV is needed to display the content.

Hi-fi audio’s equipment requirements can be just as costly as hardware for UHD. Some hi-fi audio equipment eclipses the $10,000 mark, so a price point of $20,000 “doesn’t seem too bad,” Hower said.

“At the same time, consumers are faced with the idea of buying a speaker for $2,000 or buying a phone that can do a lot more for a few hundred dollars,” he noted. “High-end audio is still an incredibly expensive hobby to have, and if it does go mainstream, it will take another two to five years before a mainstream audience can afford it.”

As for the audience awaiting Devialet’s Phantom and other hi-fi audio products, most seem just fine with audio delivered by a traditional radio and relatively low-quality audio and the headphones that shipped with their smartphones, he told TechNewsWorld.

“While hi-fi enthusiasts do exist — and I’m one of them — I don’t believe that hi-fi audio will ever be mass-market,” Cridland said. “As long as it sounds ‘good enough,’ that’s probably all that matters.”