What you are going to see in a few days, when Dell stockholders get to vote on Michael Dell’s plan to buy back his company, is a war of perceptions — and perhaps a revelation on the state of the U.S. investor. Both ISS and the Chancery Court have clearly come down on Michael Dell’s side, arguing that what Dell is offering is a sure thing, while what Carl Icahn is promising is a long shot.

More important from an empathetic standpoint is that Dell is promising to preserve the company and Dell jobs, while Icahn, who is a corporate raider by trade, is pretty much ensuring the collapse of Dell in exchange for an additional premium or thousands of people put out of work.

While it will be clear to Dell employees, their families, and friends which side of this vote to be on, I wonder how the investors — particularly the large retirement funds — will vote. Will they go for the sure deal designed to provide a strong return, or attempt to throw Dell employees — many of whom are likely related to their own customers — under a bus in exchange for a slight chance of getting a few dollars more?

We just left a time when bankers clearly were willing to sacrifice folks’ homes and jobs for wealth, and it nearly destroyed the world financial market. I think the coming vote will tell us if these investors have learned anything or if they still place greed before good sense.

I’ll close with my product of the week: the Nvidia Shield AR Drone solution.

I think we either have short memories or can easily be blinded by the promise of extra unearned cash. Reading about the TWA deal in Carl Icahn’s Wikipedia profile should give you a chill, particularly the part where he made a profit of US$469 million while leaving TWA with a debt of $540 million after selling off TWA’s valuable assets, a practice later called “asset stripping.”

He made a ton of money, but what about the rest of the investors and the poor TWA employees? They pretty much got screwed as TWA took a header into the great corporation graveyard in the sky.

TWA was one of the two U.S. flag airlines at the time — that means they were a company that stood as a shining example of the U.S. globally, and Icahn systematically destroyed it, leaving hundreds of thousands without jobs and the country with one less major flag airline.

If you wanted to weaken the U.S., a half a billion dollars isn’t a lot of money, and it kind of makes you wonder who Icahn’s investors were back then. If a big one wasn’t the USSR, then Icahn likely missed a huge potential additional investor.

After seeing what Icahn did to TWA, who’d be heartless enough to see this done to another iconic U.S. company?

What Icahn is offering is the destruction of Dell, and his promises of cash to the other investors are just that — promises. Oh, it’s clear Icahn would make a ton of cash, but I can’t make sense of his deal any more than the ISS or Chancery Court did. He is basically offering to buy part of the company and leave the investors with the remaining carcass of the stuff he doesn’t want — kind of like offering to pay a premium for your kitchen, master bedroom/bathroom and living room, but leaving you to deal with the rest of your house for a fraction of what it’s worth. It’s smoke and mirrors, and what he isn’t saying — but should be obvious — is that he would destroy Dell in the process.

So who’d want to destroy Dell or weaken the U.S. technology industry? Who is likely funding this, really?

Some of the biggest institutional investors in the market are the big retirement funds from organized labor, like the teachers’ unions — but I can’t see unions funding the destruction of jobs. I mean, were their members to find out, they’d likely vote the fund leadership out of office, because unions are about protecting jobs — and U.S. jobs, in particular — not destroying them.

Clearly, patriots aren’t going to fund the destruction of a major U.S. company and weaken the country. They’d view this as anti-American, and to them, weakening the U.S. technology industry would be tantamount to treason. They’d have to hate the U.S. a great deal to be willing to pass up a sure-thing offer from Michael Dell that would protect the company, in favor of a gamble with Icahn that would certainly destroy it.

The thinking investors would have to want badly to destroy Dell and put thousands out of work in order to weaken the U.S. I’ll let you speculate about the kind of people who would back a move like this. Certainly not someone I’d want to invest with, which is why Icahn doesn’t seem to have any investors right now, with “seem” being the operative word.

Wrapping Up: Preserve or Destroy

So we’ll see in a few weeks whether Dell investors take a sure profit and preserve Dell, or gamble to ensure Dell’s destruction. I think it will say a lot about the investors who currently hold power in the U.S. and whether they want to help rebuild the country or help destroy it.

While greed can be a powerful thing, I believe U.S. investors are as patriotic as anyone living in any other country and will chose the path that protects both their investment and Dell jobs over the alternative. I just worry that a lot of the folks voting may not be U.S. investors and may want to do the company — and by proxy, the country — harm. I hope the U.S. investors stop them cold. Thankfully, according to the WSJ, they, and we, should prevail.

Product of the Week: The AR Drone 2.0 Nvidia Shield Bundle

I was given a prototype Nvidia Shield Gaming system some weeks back, and I’ve been having a ball playing games and watching movies on it. It is actually a pretty decent music player as well, thanks to some amazing speakers.

One of the aspects of this device that just turned out amazing is its use as a controller for a drone like the second generation AR Drone. These flying camera platforms are a bitch to fly with a typical smartphone, tablet, or iPod touch, because you have to use touchscreen controls. 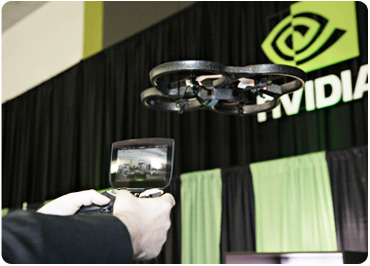 The Nvidia Shield Controlling an ARDrone

However, the Shield device has real joysticks and physical controllers that give you the precision you need to more accurately fly the device around and over obstacles. I first saw this done at an Nvidia event where the AR Drone folks had shown up and discovered what a wonderful combination their drone was with Nvidia Shield.

You can buy an AR Drone now and preorder a Shield (it is due out in a few weeks) but if you buy either, you should try them together. The result is amazing, and that is why they share Product of the Week status this week.