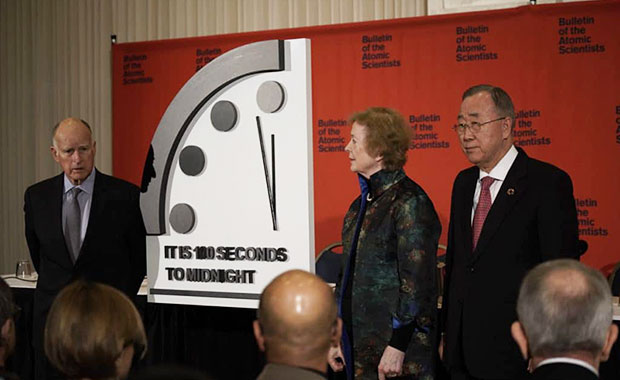 The hands on the iconic “Doomsday Clock” moved to just 100 secondsto midnight last month. That is the closest they have come to the final hour since its creation in 1947.

The Bulletin of the Atomic Scientists’ Scienceand Security Board, in consultation with the Bulletin’s Board ofSponsors, made the unprecedented decision to express the time remaining in seconds rather than minutes when the time was adjusted from 2 minutes to 100 seconds to midnight.

The time displayed on the clock has moved closer to midnight in three of the last fouryears. The last time it moved was in 2018, with a forward jump of 30 seconds. It moved to 2 1/2 minutes to midnight in 2017 from its prior setting of 3 minutes tomidnight. There was no adjustment last year, but withthe arrival of 2020 the Bulletin of Atomic Scientists noted new threats.

In addition to the two “simultaneous existential dangers” ofnuclear war and climate change, the world now faces the threatmultiplier of cyber-enabled information warfare.

The decision to movethe hands forward by 20 seconds was made in part because world leadershave allowed the international political infrastructure forcontaining this potential cyberthreat to erode.

“It is 100 seconds to midnight,” warned Rachel Bronson, president andCEO of the Bulletin of the Atomic Scientists. “We are now expressing howclose the world is to catastrophe in seconds — not hours, or evenminutes. It is the closest to Doomsday we have ever been in thehistory of the Doomsday Clock. We now face a true emergency — anabsolutely unacceptable state of world affairs that has eliminated anymargin for error or further delay.”

December 2020 will mark the 75th anniversary of the first edition ofthe Bulletin of the Atomic Scientists. It originally was a six-page,black-and-white bulletin, which evolved into a magazine. It wascreated in response to fears that the atomic bomb, which had been usedagainst Japan in August of 1945 to end the Second World War, would be”only the first of many dangerous presents from the Pandora’s Box ofmodern science.”

Origins of the Clock and Nuclear Armageddon

The Doomsday Clock, which has been maintained since 1947, isessentially a metaphor for threats to humanity from uncheckedscientific and technical advances. The clock’s original setting in1947 was 7 minutes to midnight, and over the years it was setbackward and forward a total of 24 times.

It typically is assessed in January of each year.

The largest-ever number of minutes to midnight was 17 in 1991, when theUnited States and Soviet Union signed the first Strategic Arms ReductionTreaty (START I), followed by the Soviet Union dissolving on Dec. 26 of that year. The fall of the Berlin Wall and the Iron Curtain,along with the reunification of Germany a year earlier, already had added 4 minutes to the clock.

Two more minutes were cut in 2002 due toconcerns over a nuclear terrorist attack and the fears that vastamounts of weapon-grade nuclear materials were largely unsecured orotherwise unaccounted for worldwide.

2010 saw the last time a minute was added. That followed a newSTART agreement, as well as the 2009 United Nations Climate ChangeConference, which called for the developing and industrialized nationsto agree to take responsibility for carbon emissions.

Most perceptions about the Doomsday Clock’s time to midnight are thatit always has been based on the threat posed by nuclear weapons andthe potential for an atomic war. However, other factors have beenconsidered by the Bulletin of the AtomicScientists, including energy, weapons, diplomacy and climatescience. In recent years they also have considered terrorist threats and climate change.

Bioterrorism and artificial intelligence also could be seenas potential sources of threats that could inch humanity closer todoomsday.

Cyberwarfare is a new factor — specifically cyber-enabledinformation warfare. It could include everything fromstate-sponsored propaganda to “deepfakes” to the spread ofmisinformation online. The Bulletin of the Atomic Scientists warnedthat cyber-based disinformation could cause corruption of theinformation ecosphere on which democracy and public decision makingdepend.

Moreover, many governments are utilizing cyber-enabled disinformationcampaigns as a way to sow distrust among rival powers. It has beencalled out as threat to the common good.

“In the wrong hands, technology absolutely creates a threat tohumankind that is on the same scale as current weapons technology,”warned Bill Santos, president of Scottsdale, Arizona-base Cerberus Sentinel.

“Improperly used or maliciously deployed, technology can cripplecritical infrastructure, upset financial systems, and disable many ofthe systems we depend on for our survival and happiness,” he told TechNewsWorld.

New arms treaties and greater cooperation among nations have allowedthe doomsday clock to be set back — gaining precious seconds, or insome cases even minutes. However, the new threats are so great thatthere may be no easy way of addressing them and regaining timebefore the hands strike the proverbial midnight.

“The risk of cyberwarfare is on par with nuclear risk and climatechange — and it may even pose a greater risk than both,” explainedMarc Gaffan, CEO of Israel-based cybersecurity firm Hysolate.

“A decade ago, cyberthreats had somewhat manageable impacts — datatheft that would rock the stability of the organization, or monetaryloss that would affect performance and a company’s stock price for acouple years,” he told TechNewsWorld.

Today cyberattacks can result in serious business disruption that isfar beyond either data theft or monetary losses. A cyberattack couldpose a threat to all aspects of infrastructure, from power grids tocommunication networks.

“Nation-state attacks like this stem back to 2010 with Stuxnet,” noted Gaffan.

The Stuxnet attack, which likely was conducted as a jointAmerican-Israeli effort, successfully crippled Iran’s nuclear program. Iranian hackers were believed to be responsible for a 2018 cyberattack against a Saudi petrochemical facility.

There was no loss of life in either attack, but each increasedregional tensions. Moreover, such attacks could result in physicalequipment failures that would lead to human casualties.

It’s far too easy “for malicious attackers to cause physical damage” said Gaffan, “and the impact is far too great for this to not be a significant factor driving us closer to midnight.”

Even more worrisome is the fact that much of our modern infrastructureisn’t as secure as it could be.

“The unfortunate truth also is that the power grid and other nationaloperations that literally keep the lights on are not built with themost sound security in place to prevent an attack from causing acatastrophic blackout or causing fatal medical device failures,” said Gaffan.

It might be difficult to put time back on the Doomsday Clock,but it’s not impossible. Here is where cybersecurity as a defensive toolcould be crucial. The world could be safer if more governments, companies andindividuals all paid greater attention to cybersecurity.

“Education and awareness can help move the hands back,” said Gaffan.

“Ultimately, we as a society need to start thinking of securityfirst — and not as an afterthought — in everything we do,” he urged.

To that end, security needs to be built into the core architecture ofeverything — from the software and applications that are being builttoday to the improvement of legacy systems and infrastructures thatare currently in place.

However, due to advancements in technology, the risk of cyberwarfare will always be with us, warned Gaffan.

“The best we can do is mitigate the risk by staying one step ahead ofattackers in building devices and an infrastructure that aresecure-by-design,” he argued.

The defense against this threat goes beyond thetechnology itself, suggested Cerberus Sentinel’s Santos.

“We need to create a comprehensive culture of security at thegovernment, corporate and individual level that is aware of thisthreat and understands the steps each can take to address it,” he said.

This could begin with education to better understand the unique set ofrisks a completely connected civilization faces.

“It is followed with an understanding of what can be done, at everylevel, to address or reduce these risks,” said Santos. “We need tothink of security holistically, understanding that it is anexistential risk that affects aspects of our interconnected lives. Weare far too dependent on technology to address our security needs.True cybersecurity is a culture.”