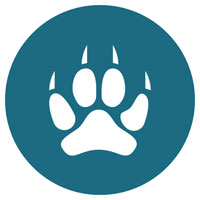 Cub Linux provides a complete Chromebook experience on the hardware of your choice. The innovation is quite impressive. Cub Linux also runs software from the Ubuntu distro ecosystem.

When I reviewed the Linux hybrid Ubuntu-based Chromixium distribution in May of last year, I liked it so much that I continued using it on some of my aging hardware. I found that it ran super-fast on my new gear, and I now run the new Cub Linux version on that same gear.

Cub Linux 1.0, released on July 1, is a replacement for the former Chromixium 1.0. It does not disappoint. In fact, performance-wise, it picks up where Chromixium left off. It has some new features and system updates. Cub has expanded into a 64-bit version. 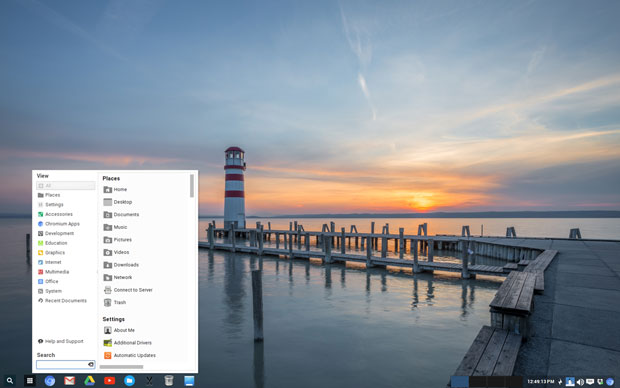 Cub Linux blends thesimplicity of the Web-based apps of a Chromebook with the desktopfunctionality of a Linux desktop environment. A menu button on the leftend of the panel bar performslike traditional Linux.

Linux is all about exercising options. Cub Linux is a solid example of the way Linux distros can differ from one another.

I use a Chromebook capable of running Android apps as a replacement for my collection of Android tablets. I have Cub Linux installed as a dual boot on my bigger Linux laptop.

Having Cub Linux on board gives me added flexibility when I am on the go. It adds the convenience of my Google apps. I do not have to work crunched on my smartphone or other small portable devices.

I have just one disappointment with the concept of mixing a Chromium browser environment with a traditional Linux distro underbelly. Cub Linux can not run Android apps. Google is starting to roll out that feature on certain Chromebook models.

Cub Linux reaches a higher rung on the developmental ladder than other Chrome OS-style distros do. Take the Chromium OS and Cr OS Linux distributions, for example.

Chromium OS offers a no-frills approach to trying out the concept of a browser-based Linux operating system without buying a branded Google Chromebook.

On any compatible computer, it boots from a USB drive into the Chrome browser environment — as does Cub Linux. However, it does not have a full Linux desktop under it to run other Linux applications.

Cr OS Linux comes closer to blending the Linux desktop with a special edition of the Chromium Web browser. It gives you a taste of Linux Mint with a chaser of a not-quite-pure Google Chrome OS.

Cub Linux does not need a dedicated machine, such as the Chromebook, to run. It does not require an Internet connection to access locally stored programs. Cub combines the simplicity of the Chromebook with the flexibility and stability of Ubuntu’s Long Term Support release.

What Cub Linux Does

Cub Linux and Chrome OS are not the same operating systems — but they are very similar.

Cub Linux boots into a Chromebook environment on any computer. It runs the Chromium Web browser by default.

This choice enhances the flexibility of Chromixium. Even using the Chromium default browser gives you access to all of your Google account apps and features, once you sign into the browser with your Google credentials — but signing in is optional.

Cub Linux and Chrome OS both use Web apps rather than standalone local programs. However, unlike Chrome OS, Cub Linux lets you install and run local Linux packages. Cub is a fully functional Linux distro mated to a Chrome OS-like environment. 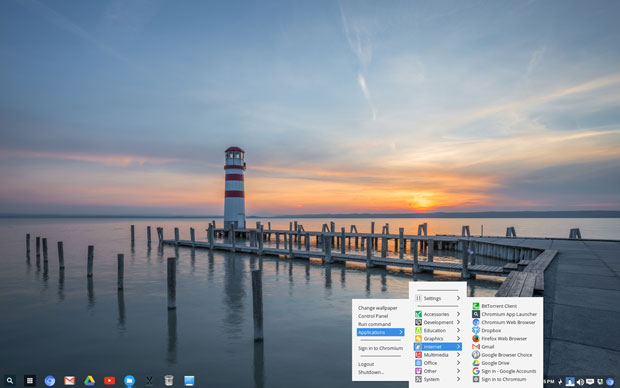 The Cub Linux desktop is morethan a clone of the Chrome OS. Right-click anywhere on the desktop or panelbar to expose the traditional Linux applications.

Cub Linux 1.0 is based on Ubuntu 16.04. It combines the Openbox window manager with the Compton desktop compositor and LXDE’s LXPanel to provide the desktop and menus. You do not feel boxed into the browser environment — you have a real Linux desktop.

Cub Linux offers two very useful user interface features. One is virtual desktops. You do not have that feature with Chrome OS on a Chromebook. The other is having a real Linux panel bar with standard Linux applications and system tools.

Cub Linux has the look and feel of a Chromebook. With an Internet connection, the look-alike user interface loads the Google App Store and all of the Web apps in the Google ecosystem.

You have access to the Ubuntu Software Center, as well as the Synaptic Package Manager, to add or remove Linux applications that are not among the Web apps in the browser interface.

One difference in Cub’s look and functionality is the fully functional panel bar at the bottom of the screen. On the left end, the panel displays the familiar magnifying glass to open the Chromium app launcher. Next to it is an icon to launch the Linux applications with full access to the system tools.

The Chromium app launcher is going away, though. Although Google has retained it in the Chrome OS that runs the Chromebook, it has retired the launcher from the Chrome Web browser and the Chromium browser.

I have applied the workaround: I placed the launcher icon on the Web browser’s bookmarks bar. It is not as convenient as having it in the panel bar, though.

Here is how to do it — and this method works in whatever Linux distro you use that runs the Google Chrome or the Chromium Web browser. 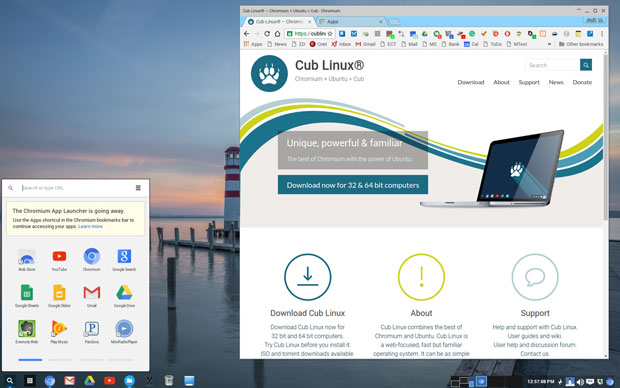 Google has removed thestandard Chrome OS app launcher, but you can retain it on thebrowser toolbar, albeit for less-convenient access to your installed Chrome Storeapps.

Cub Linux 1.0 has much of the stability and maturity of a more established Linux distro.

It is a great alternative to Google’s semi-proprietary Chrome OS locked into the popular Chromebook hardware.

Cub Linux is a Chrome OS clone that runs on nearly any aging or newer computer with the user’s choice of the fully open-sourced Chromium Web browser or Google’s Chrome browser.

Please email your ideas to me, and I’ll consider them for a futureLinux Picks and Pans column.