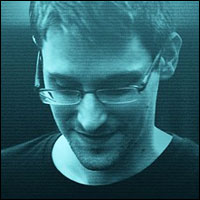 The award highlights the divisions in the U.S. over Snowden’s actions and the question of national security.

“The disclosures that Edward Snowden reveals don’t only expose a threat to our privacy but to our democracy itself,” Poitras said in her acceptance speech.

“When the most important decisions being made affecting all of us are made in secret, we lose our ability to check the powers that control. Thank you to Edward Snowden for his courage, and for the many other whistle-blowers. And I share this with Glenn Greenwald and other journalists who are exposing truth,” she added.

In the aftermath of the audience’s applause, Oscar host Neil Patrick Harris quipped that Snowden “couldn’t be here for some treason.”

Glen Greenwald, the journalist whose role in publicizing Snowden’s revelations also was documented in Citizenfour, later commented that Harris’ remark was “stupid and irresponsible.”

Greenwald said he would treat it as a pitiful joke, while noting the irony of “Hollywood’s fondness for congratulating itself for doing things like standing up for McCarthyism and blacklists.”

However, intelligence figures such as former CIA director General David Petraeus and U.S. Director of National Intelligence James Clapper have blasted Snowden as a traitor — even though, as Greenwald pointed out, he has neither been charged nor convicted of that crime.

At the same time, a movement to pressure President Obama for his pardon has gained strength. Snowden also has gained considerable media support for his actions.

So far, the administration has ignored a petition that garnered nearly 165,000 signatures by June 2013. The grassroots organization We the People organized that petition, which is posted on the Whitehouse.gov website.

“Acting on the pardon is a lose/lose proposition any way you look at it,” said Charles King, principal analyst at Pund-IT.

“Granting it would provide conservatives and their allies a field day and stir up their base voters,” he told TechNewsWorld.

Ignoring the pardon “is the smart choice politically — and, I think, practically,” King said.

The Voice of the People

A new petition to have Snowden pardoned, launched by the ACLU, already has collected 52,742 of the 60,000 signatures needed.

“Many people do not agree with some of the actions or methods used by the U.S. government to gather information,” suggested Jim McGregor, principal analyst at Tirias Research. “As a result, they feel Snowden’s actions were justified.”

Petitions do tend to lump people together, which makes it difficult to discern their motives, and there will always be people on the fringe who sign petitions, King said.

Still, the Oscar voters “aren’t known for being especially revolutionary,” so the accolade for Citizenfour might indicate the depth of support for a pardon for Snowden.

Then again, the limited support the petitions have garnered “would definitely indicate that this is not a majority opinion,” McGregor pointed out.

That’s because there are two issues at stake here, he explained. One is whether people agree with the activities of the U.S. government in the name of national security, and the other is whether Snowden’s activities were criminal.

The Quality of Mercy

“What Snowden did was clearly illegal, but he also clearly showcased that the government was acting illegally on a massive scale,” said Rob Enderle, principal analyst at the Enderle Group.

“I think that most of the effort should be to ensure someone like Snowden, who discovers crimes like this, can report them without risking their life, citizenship, freedom or career,” Enderle told TechNewsWorld. “The focus seems to be on the guilt or innocence of the whistle-blower rather than the bigger problems they have identified, and this is an ongoing problem.”

The nature of the disclosures made, along with the lack of an appropriate way to make them so that related problems would be addressed instead of being swept under the carpet, “should provide a strong foundation for clemency,” Enderle said.

The Obama administration reportedly tried to block the petition for Snowden’s pardon on Whitehouse.gov.

That action would to run counter to the administration’s proclamations of being open and transparent, but it “hasn’t been that much more transparent than others, and we aren’t a democracy — we’re a republic,” Enderle said.

However, “when any government violates its own laws you have a serious problem, because that is abuse of power — and once people in power start to justify their breaking laws, they often find it very difficult to stop,” he observed

In any event, “it is virtually impossible for any government security agency to apologize or admit mistakes, even those that occurred far in the past,” King said.

Given recent events — three British Muslim girls leaving the UK to join ISIL, and Somali terror group Al-Shabaab releasing a graphic video calling for terror attacks on shopping malls in the U.S. and Europe — perhaps an argument could be made for a security clampdown.