Calling BS on Clueless Predictions by Musk and Ma

There was an interesting dialog between Elon Musk and Jack Ma last week. Two of the most powerful men in the world, they both have invested heavily in artificial intelligence. Ma, who is the Alibaba Group cofounder and a huge advocate for the 12-hour a day six-day Chinese work week in tech, indicated that he believed AI would reduce the work week from 72 hours (where it now is in China) to 12 hours — that is, three 4-hour workdays. I think he has firmly stepped away from his reality.

Both he and Musk then spoke about how future workers will have training pumped into their brains. In both cases, they showed no apparent knowledge of how compensation works for the rest of us — or how brains work.

I’ll share my thoughts on why a 12-hour work week wouldn’t be a good thing, and why their idea of hardwiring brains to computers to speed up training will be a long time coming.

I’ll close with my product of the week: a cool all-in-one desktop computer from Lenovo, the IdeaCentre A540.

If you think about it, we have been implementing labor-saving devices since the first tool was created, but work weeks generally have been getting longer, not shorter. The reason for this is that the amount of work we are paid to do, at least for most of us, is not determined by the task. We are paid in bulk — by the hour, week or month.

That is the nature of a salary. Regardless of how long you work or the amount of actual work you do, you make a fixed amount. Granted, hourly workers get overtime, but most of us in tech are on salaries, and typically, salaries don’t come with overtime.

A boss that gives employees a labor-saving device doesn’t expect them to go home early but to do more during the allotted time. If you examine the history of this issue, you’ll see predictions of short work weeks going back decades, if not centuries. Those predictions have not borne out, due to the salary compensation system. Management believes that people should be at work for what the firm considers a full work week. That week in China is typically 12 hours a day for six days a week.

To fix this, we’d need to change compensation methods so employees were compensated based on the work performed rather than time in the office. Employees would need an optional reward for doing more than the set amount of work the salaried job called for in a given week. That way they could choose to work less and get paid less or work more and get paid more. But we aren’t set up that way, and maybe we don’t want to be.

Years ago I worked for a company that provided a sabbatical after seven years. Unlike most, it gave employees a choice of three months off at full salary, or 1.5 months at double salary. The reason for the second option was that employees still had to meet all their regular expenses, and anyone who wanted to do something interesting would have to find a way to fund it. At double salary and less time, an employee could get extra money and still go on a 45-day cruise, for example, and not end up in a ton of debt.

Taking this to scale, we could have millions of people with mostly free time during the week and no real money to spend to enjoy it. What generally happens when people have a lot of free time and little extra money to spend? They generally become unhappy, and lots of unhappy people lead to demonstrations, acting out through substance abuse, and increased criminal activity. The term, “Idle hands are the devil’s playground,” unfortunately is well-founded.

So, even if we did get a 12-hour work week, we’d likely be less happy than we are now — and probably less safe as well, unless society could come up with better cost-free ways to spend time.

One of those things could be re-education, but Musk and Ma want to fix that as well.

Another Bad Idea: Streaming Directly Into the Brain

Now I say streaming training — or anything — directly into the brain is a bad idea, though I know full well we eventually will do this. One hurdle is that we still don’t know how information is organized and categorized in the brain. However, we do know that the brain wasn’t designed for rapid data input. Otherwise, we’d all have far better memories.

We have no idea what pumping data into the brain would do but, odds are, there would be a ton of collateral damage. Odds are we’d lose a lot of memories we didn’t focus on in the process. How much of your past unavoidably would be lost because you were overwriting, at high speed, parts of your brain that contain critical memories?

This process could be like intentional Alzheimer’s. You might end up with new skills, but you’d likely trade off other memories, like those of raising your kids or pets. I can imagine suddenly being able to fly an interplanetary drone, but the trade-off might be no longer recognizing my wife.

Before we pump data into our brains, we sure as hell better figure out how to back up our brains. Otherwise, we could end up with a lot of highly skilled human vegetables. If that 12-day work week took hold, those poor folks would have a ton of time to object to the loss of their valued memories.

Ideally, you’d want to first upload the entire repository of memories; then integrate the new set of skills and prototype the result to make sure it didn’t result in some brain processing failure. Then you would upload the new memory repository complete.

This brings up many issues. If you could do that, you could change all of a person’s memories — not just the ones related to training. That would be a huge can of worms, because a government or company could obliterate both disloyal thoughts and the foundation elements that created them.

In short, your entire personality could change, creating problems for the people close to you. A lot of folks likely would conclude that it just might be easier to use an android in the first place. This scenario kind of sounds like a plot for Black Mirror.

Over the centuries we’ve had a lot of rich people with bad ideas from the famous “Let them eat cake” remark, which was connected to a rather severe backlash, to some current comments.

You have to know that Jack Ma is thinking that rather than 12 hour work weeks at full pay, he’ll either have 72 hour weeks but 5x the output at the same pay, or 12-hour work weeks with the same output at one-fifth the payout. That would lead to a lot of really unhappy people with a lot of time on their hands, which typically ends badly for those in power. Ask the “let them eat cake” folks.

Anyone who is serious about short work weeks has to do two things: 1) Increase average incomes, so folks can afford to do something with their extra free time; and 2) Change the way people are paid so that they are paid for the job, not for the time spent on it.

Anyone who wants to pour data into workers’ brains better have a clear idea of what the collateral damage will be (and fix it), or the level of backlash could make the French Revolution look like a walk in the park.

In the end, it is both fascinating and frightening that folks in power are thinking these incomplete thoughts, but given they’ll likely result in violent behavior targeting those same folks in power, this may be self-correcting. What it certainly is not is smart. As a side note, Musk has been pretty much off the rails of late. (Way off the rails .)

Back when the PC company at IBM was still in IBM, IT came up with an all-in-one computer that was so well designed and attractive, it made it into the Smithsonian. In its final form it was even upgradable, a feature that was lost to time.

Well, Lenovo, which bought the PC business from IBM, just launched a new all-in-one that sets a new bar for the class, which often is defined by its beauty, not its performance. 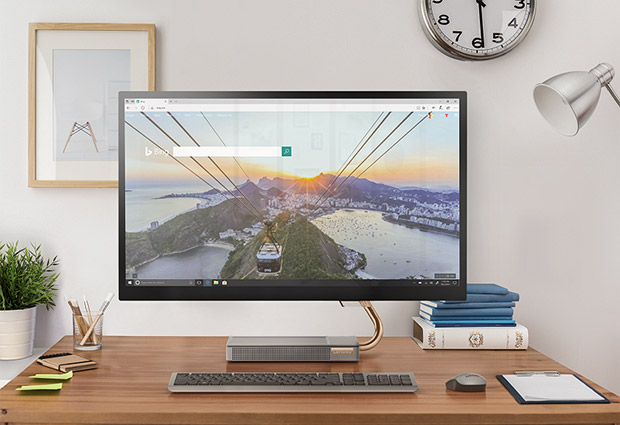 Arriving with both 24-inch and 27-inch display, options the Lenovo IdeaCenter A540 — one of a number of relatively attractive offerings launched last week — has a tiny base, single-arm support for the screen, and decent performance with up to an Intel 9th-generation Core i7 (or AMD Ryzen CPU) and discrete AMD Radeon RX560 graphics; 10-finger touchscreen capability is optional.

It has an IR camera compatible with Microsoft Hello and a physical privacy shutter for those who don’t want even the risk of someone watching them. Oh, and it even includes a wireless charger for phones and tablets that support wireless charging. Prices range from a very reasonable US$799 for the base 24-inch model to $1,299 for the fully loaded 27-inch machine.

The thing is a piece of desktop art. Its design inspiration was the Chinese cypress tree, and it’s one of the cleanest designs in the market, so the Lenovo IdeaCenter A540 is my product of the week.