Breakthrough Could Lead to Cure for AIDS and Other Deadly Viruses

Viruses have long been the bane of the medical world. For centuries, healthcare experts have struggled to treat everything from virus-induced sniffles to lethal epidemics. At the very core of the problem is the constant emergence of new viruses and the continuous flux of old ones. It doesn’t help that even the strongest antibiotics are impotent against even the weakest virus. This is why the recent discovery of a new broad spectrum antiviral treatment is nothing to sneeze at. 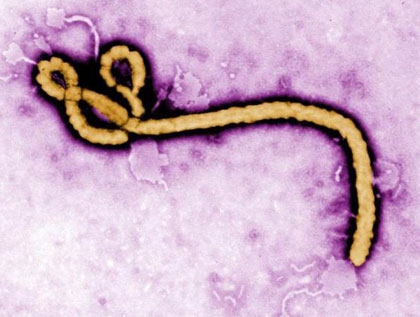 Ebola virus. A small-molecule ‘broad spectrum’ antiviral may be able to fight everything from flu to Ebola to AIDS. (Credit: Frederick Murphy)

Researchers at UCLA, the University of Texas Medical Branch, Harvard University, Cornell University and the United States Army Medical Research Institute of Infectious Diseases have developed an antiviral compound that attacks a wide variety of viruses through a common feature: their outer coating.

Essentially, there are two kinds of viruses: one is enveloped in a membrane, and the other is bare-naked.

The clothed ones are covered, or enveloped, in a lipid substance that is central to their attack arsenal. The virus uses the membrane to insert its genome into a host cell, causing an infection.

The newly discovered compound, a rhodanine derivative that the researchers have dubbed “LJ001,” inactivates the membrane and thus disrupts infection.

Why ‘Broad-Spectrum’ Doesn’t Cover Everything

Obviously, since LJ001 works by attacking a virus membrane, it doesn’t work against viruses that naturally exist without a membrane.

However, a large number of membrane-enveloped viruses could be treated with this approach: These include HIV-1, influenza A, filoviruses, poxviruses, arenaviruses, bunyaviruses, paramyxoviruses and flaviviruses.

These viruses cause some of the world’s deadliest diseases: AIDS, Nipah virus encephalitis, Ebola, hemorrhagic fever and Rift Valley fever. The compound should also work against viruses we haven’t yet discovered or that have not yet emerged on the scene, as long as they have a membrane.

What makes LJ001 doubly-cool is that it doesn’t hurt normal (human) cell walls.

“We provide evidence that the small molecule binds to both cellular and viral membranes, but its preferential ability to inactivate viral membranes comes from its ability to exploit the biogenic reparative ability of metabolically active cells versus static viral membranes,” said Benhur Lee, associate professor of microbiology, immunology and molecular genetics at the David Geffen School of Medicine at UCLA and the primary investigator in the four-year study.

“That is, at antiviral concentrations, any damage it does to the cell’s membrane can be repaired, while damage done to static viral membranes, which have no inherent regenerative capacity, is permanent and irreversible,” Lee added.

The U.S. government has recently set its sights on broad-spectrum antivirals in an attempt to gun down as many virus-caused diseases as possible with a single treatment.

“Since the government has changed its priorities to support development of broad spectrum therapeutics, more and more groups have been screening compound libraries for antivirals that are active against multiple viruses in a specific class,” said Lee.

This newfound interest raises the question of why the government feels a need to so aggressively seek cures for viral infections. One part of the answer is particularly ominous: Viral diseases have been stockpiled by some governments as leading components of biological warfare.

That stockpiling leads to an urgent need to find antivirals to combat even diseases that once were thought extinct. For example, it has been over 30 years since the last incident of smallpox — yet it is now feared again, as a primary biological weapon. The disease is aggressively contagious and deadly.

One result: U.S.-based SIGA Technologies, a drug development company in the biodefense arena, told TechNewsWorld that it anticipates approval from the U.S. Food and Drug Administration in 2011 for its antiviral smallpox cure. [*Correction – Feb. 5, 2010]

SIGA has responded to BARDA’s (Biomedical Advance Research and Development Authority) RFP for the procurement of 1.7 million courses of smallpox antiviral for the U.S. stockpile to protect against bioterrorism attacks.

However, virus attacks aren’t necessarily acts of war or terrorism. Viral illnesses such as the recent H1N1 flu outbreak pose sweeping threats to entire countries with little regard for geopolitics.

Even so, FDA-approved broad spectrum antivirals are relatively rare. These drugs have, thus far, delivered mixed results at best. For example, Ribavirin affects both virus proteins and the host cell and is effective on only a limited number of viruses. An antiviral that attacks the hepatitis C virus, a-interferon, produces unwanted side effects and is too expensive for widespread use.

Since LJ001 does not harm normal cells, it is a particularly promising treatment option.

Successful antiviral drugs are not limited to those that attack the outside structure of the virus. There are many fronts on which to attack a given virus. The precise way a specific drug works is thus often less clear than the studies that report the outcome would seem to indicate.

For example, a research project led by Iowa State University’s Mei Hong, published in the Feb. 4 issue of the journal Nature, focuses on clarifying previous studies with conflicting views on how antiviral drugs that block influenza A viruses work.

This new study finds that antivirals prevent influenza A viruses from reproducing and spreading by attaching to a site within a proton channel necessary for the virus to infect healthy cells. In effect, the antiviral blocks the channel much like cholesterol shuts off an artery.

Similarly, the exact mechanism of LJ001’s viral membrane inactivation is unknown, and the researchers are seeking an explanation. What knowledge is available is for the most part reassuring, including that the drug does not appear to be toxic in vitro or in animals at normal dosages.

By attacking a common feature such as channels in flu viruses and sticky membranes in even deadlier viruses, an antiviral becomes effective against an entire group rather than just against a single virus. This is all very hopeful stuff in light of the growing viral threats on both the natural and man-made fronts.

*ECT News Network editor’s note – Feb. 5, 2010: Our original publication of this article stated that SIGA expected FDA approval for its antiviral smallpox cure in 2010, based on erroneous information provided on behalf of SIGA for this story. In fact, SIGA anticipates FDA approval in the second half of 2011, company spokesperson Sharron Silvers told TechNewsWorld on Feb. 5.
Get Permission to License or Reproduce this Article