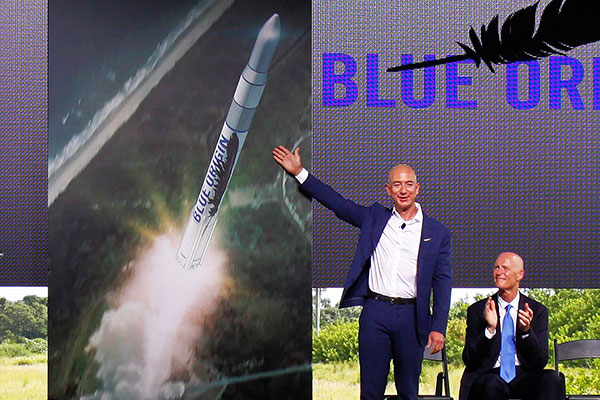 Blue Origin on Tuesday announced plans to launch rockets from a Cape Canaveral launchpad, which it has leased from NASA.

“The site saw its last launch in 2005, and the pad has stood silent for more than 10 years — too long. We can’t wait to fix that,” said Blue Origin CEO Jeff Bezos, who is also the founder of Amazon.

It’s the sort of thing the folks at NASA like to hear. People are interested in space again, and a reboot of the space race is playing out between two of the commercial spaceflight industry’s top players.

After losing out to SpaceX on a land lease, Blue Origin has snatched a lot in the same neighborhood at Cape Canaveral.

SpaceX plans to launch its next rocket from Launch Pad 39A in 2016, while Blue Origin hopes to fire off its first spacecraft from the historic Complex 36 before the decade comes to a close.

The tenants from the commercial spaceflight industry are fulfilling an initiative NASA started roughly five years ago to establish a multi-user spaceport for government and commercial projects.

As the space shuttle program drew to a close, NASA knew it would have a number of assets it would no longer require, said Tom Engler, deputy director of the Center Planning and Development Directorate at NASA’s John F. Kennedy Space Center.

NASA wanted to make its old assets available to the commercial space industry to help it realize its goals “faster and more efficiently than they would have otherwise,” he told TechNewsWorld.

“So we started about five years ago partnering with commercial space, and we had some significant wins here at Kennedy Space Center to help us construct the multi-user spaceport,” Engler said.

One of those victories was a partnership with SpaceX for use of Launch Pad 39A, which the company is rehabbing to host the launch of its Falcon 9, Falcon Heavy and Dragon spacecraft, according to Engler.

Another victory was Boeing taking occupancy of the old orbiter processor facility, which it has converted into the Commercial Crew and Cargo Processing facility. NASA worked with the state of Florida to sublease the center to Boeing, which will use the facility to build its new CST-100 spacecraft.

“We created that agreement with the state of Florida,” Engler said. “Florida is subleasing that to Boeing and allowing them to use that facility to build their CST-100 spacecraft, which they recently unveiled as the ‘Boeing Starliner.’ That’s the new name for it.”

Blue Origin’s move into Complex 36, with plans to build locally, is another victory for NASA, the state of Florida and the Space Coast.

“Our relationship with the commercial space industry is in a number of ways very good,” Engler said. “We’ve had a partnerships we’ve developed here with respect to providing new capabilities to enable their commercial space endeavors.”

Resurgence of the Space Coast

Securing new tenants for the multi-user spaceport has been just one facet of NASA and Florida’s goal to incubate the nascent spaceflight industry in the region known as the “Space Coast.” State and federal officials also have been pushing for commercial companies to build their rockets on Florida’s east coast.

In the commercial space industry, there’s an opportunity to leverage the synergies of consolidated operations, said Dale Ketcham, chief of strategic alliances for Space Florida. Florida is poised to benefit from those economic efficiencies.

“We had once just been a launch site,” he told TechNewsWorld. “Now we build capsules for Lockheed Martin and Boeing, and soon we’ll be building rockets for Blue Origin. We still have much to do, but we are well on our way to providing end-to-end services for the space marketplace of the future.”

Geography is a major reason the Space Coast is ideal for the space industry, noted Ketcham. It’s why the government secured the 147,000 acres where the Kennedy Space Center rests.

“Often [spacecraft and rockets] were shipped from elsewhere with the expectation that it will work — but here in Florida, we see to it that it does,” Ketcham said. “This mentality has engendered not just a capable workforce, but a community culture that knows what it takes to get people and payload into orbit.”

Now, with Blue Origin serving as another win for the Space Coast, questions about the future of the Kennedy Space Center seem to be drowned out by all of the activity going on.

“There was a general concern over the future of the Kennedy Space Center,” said NASA’s Engler, “but from where we are now, the future is very bright.”