Blender is such a highly specialized and powerful rendering app that at least two Linux distros are built around it. This cross-platform 3D graphics application matches features and performance of the leading commercial equivalent software packages. 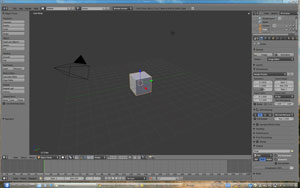 Professional-strength rendering software is not a tool for tinkerers. It also is not a product that must-have-it users will find at bargain prices. In fact, the open source product — in other words, Free Open Source Software, or FOSS — may well be the only free option for serious designers.

With that reality in mind, Blender’s free open source availability and feature-rich performance make it a win-win choice for graphic designers. Prices for similar top-tier designer software in the commercial marketplace sells from just under US$1,000 to well over $6,000.

You don’t think so? Here are the current purchase prices posted on the product makers’ websites. Autodesk 3ds Max Entertainment Creation for Windows will set you back $6,825. Autodesk Softimage for Windows and Fedora 14 are available by licensed subscription for nearly half that price at $3,145.

If computer-assisted graphics designing is your passion, getting Blender in its own Linux distro may offer a compelling reason for migrating to the Linux desktop. Rather than adding Blender to your current Linux distro, consider Blenderbuntu and Blender-Boot. More on these two alternative distros shortly.

Blender is a 3D content creation suite available for all major operating systems under the GNU General Public License. It is a fast and versatile design tool for three categories of image designing. It excels in modeling, UV unwrapping, texturing and rigging.

Second, you can use it to create water, particle and other simulations, as well skinning, animating and rendering. Third, it also is the go-to Linux app for non-linear editing, compositing and creating interactive 3D applications, including games.

Caution: Blender’s original purpose was not a video editing tool. Rather, it was designed as a 3D animator/compositor with advanced capabilities. However, within the functions of animation graphics, Blender handles that aspect of video editing just fine.

If you fancy yourself an artistic film buff, check out Blender’s role in making some impressive animated movies here and here.

An in-house application developed by a Dutch animation studio produced the Blender software. Its creators released Blender as open source code under the terms of the GNU General Public License in 2002.

That occurred in exchange for a one-time payment and a successful campaign to collect donations. The Blender animation project continues to grow under the direction of the Blender Foundation community.

The original animation studio shuttered its doors. But Blender’s main driving force formed the Blender Foundation as a non-profit organization.

Blender is a power-packed application. But it can be a tad intimidating to first-time users. If your exposure to professional-strength rendering apps starts with Blender, plan on spending a few rigorous hours learning how to use it.

Once you get used to its unique user interface, the learning curve shortens considerably. Be sure to make use of the numerous image galleries at the Blender website. You can see very useful tutorials here.

Blender makes extensive use of keyboard shortcuts. It also has a much different look and feel than you see in other types of image manipulation software.

Three factors impact on adjusting to the Blender GUI (Graphical User Interface). One is that the concepts behind it are specifically designed for a graphics modeling application.

The second factor is that its vast array of features are very different from other 3D software packages. You will also find them organized very differently.

Another unique factor of Blender’s design is how it handles button choices and mouse movements. Some features look familiar, such as the top menu bar that shows of File, Add, Render and Help.

Other interface approaches are radically strange. For me, the way Render works is totally unnerving. But I am not a graphic designer.

For example, Most of Blender’s windows cannot overlap and hide each other. But other elements, such as the numerous mini-floating panels, are transparent, foldable, small and dockable.

Blender’s interface is based on OpenGL. You can pan, zoom in/out and move content around in every window. You also can organize the screen your way, naming and saving the preferences for use in related projects.

One of the real beauties of the Linux OS is the ability to carve out niche distros. According to its developers, BlenderBuntu renders a scene 44 percent faster than using Blender elsewhere.

This Blender-specific distro has a stripped down optimized chrome Web browser (Chromium) and automatic Blender updates whenever a new build is available.

It includes the GIMP photo editing suite, a screen recorder and a lightweight, lightning-fast desktop environment. Besides its own file manager, it offers a full suite of LibreOffice, a text editor and a terminal.

This second Blender-specific distro is designed for use as a dual-boot Linux distro. It boots directly into a light environment with Blender already open.

I have not tried either of these distros. But the idea of having a Blender-specific distro would be very appealing to me if I was a graphic designer looking for an edge over other 3D rendering apps on other platforms.

Blender is a top-flight application for designing movies, games and all things animated. You can export your projects to common video formats. You can supplement its features with an interesting collection of add-ons and resources, texture and sequence plug-ins.

But avoid your distro’s repository if you want the most current Blender version. Version 2.63a is available from developer’s website. Version 2.5, released on Feb 17, is provided in Linux Mint and Ubuntu software repositories.