After a year of study, researchers have concluded that a Martian meteorite found in the Sahara desert in 2011 is a new class of meteorite — one that adds credence to the idea that life may have existed on the Red Planet. 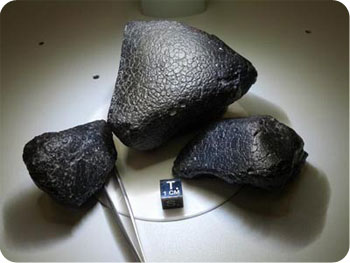 NWA 7034, nicknamed “Black Beauty,” could shed light on the Red Planet’s past.

The meteorite, Northwest Africa (NWA) 7034, nicknamed “Black Beauty,” is black and about the size of a baseball.

The researchers, led by Carl Agee, professor of Earth and planetary sciences at the University of New Mexico, have determined that the meteorite was formed 2.1 billion years ago.

“Most scientists think Mars was warm, wet and had harbored life, and some time later lost much of its atmosphere and water and became a harsh environment,” Agee told TechNewsWorld. “This is from the time when things were changing on Mars, and that’s why it’s exciting. Maybe the change had taken place, or maybe there was still water around.”

The meteorite, which weighs about 11 ounces, contains about 10 times more water than any other Martian meteorite.

It closely matches surface rocks and outcrops that were examined by the Spirit and Opportunityrovers sent to Mars by NASA.

“Having a lab sample that’s similar to the rocks being looked at by the rovers is great,” Agee said. “It also demonstrates how important it is that we go to Mars and bring back rocks to the lab.”

NWA 7034 is made from brecciated volcanic rock. Breccia is the name applied to rocks constituting broken fragments of minerals or rock held together by a fine-grained matrix that can either be similar to or different from the makeup of the fragments.

Researchers at the University of New Mexico performed microbeam and X-ray analyses of minerals in the meteorite. They also performed water analysis, stable isotope analysis and age-dating tests.

Team members at the University of California, San Diego tested for oxygen isotopes of water and carbon dioxide. Others, at the Carnegie Institution, studied the carbon in the meteorite and discovered it contained organic macromolecular carbon similar to that seen in other Martian meteorites.

NWA 7034’s chemistry is consistent with surface rocks that have interacted with the Martian atmosphere. It contains 6,000 parts per million of water.

The possibility of life has been posited since at least the publication of books by Edgar Rice Burroughs on Mars, and the analysis of NWA 7034 gives further credence to this line of thinking.

“If you do find such materials, it would make it more likely that life on Mars may have existed,” Rogier Windhorst, Regents professor at the School of Earth and Space Exploration at Arizona State University, told TechNewsWorld. “It’s not a proof, but it’s one of the necessary conditions. More data is needed.”

It’s still not clear whether or not Mars was warm and wet at the time the rocks like NWA 7034 were formed, but “there was enough water around to have a significant amount of reaction with the volcanic rock when it was cooling, and that meant water was plentiful,” research team leader Agee said. However, it’s not known whether that water was on the surface, in the form of lakes or rivers, or was underground.

Still, “this at least opens minds to the possibility that things on Mars were perhaps a lot more favorable [to life] even two billion years ago,” Agee continued.

NWA 7034 was formed during Mars’ Amazonian epoch. This is the latest of the three epochs that constitute the geologic history of Mars. The oldest is the Noachian epoch, followed by the Hesperian.

The Amazonian epoch has seen the formation of the Olympus Mons volcano which, at nearly 14 miles high, is the tallest mountain on any planet in the Solar system, standing about three times Mount Everest’s height above sea level. [*Correction – Jan. 6, 2013]

Mars’ broad plains and sand dunes near its poles were also formed during this period.