‘Arms’ Could Help Nintendo Fight Its Way Back Into the Ring 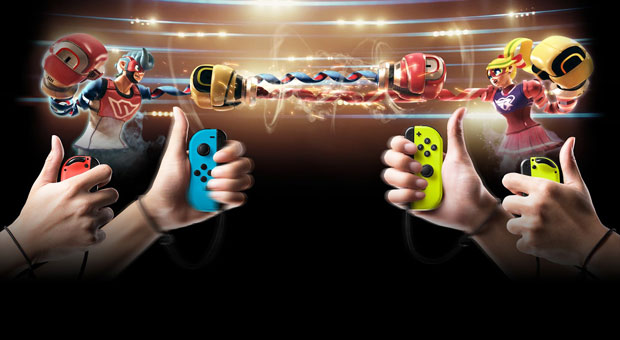 Arms, the highly anticipated fighting game for Nintendo’s Switch, will be available next Friday, and based on the early reviews, the company just may have found the magic bullet.

Nintendo’s Switch console, launched earlier this year, has been something of a surprise success. Prior to its launch, it seemed like a risky play for the company, which has been bobbing and weaving in its efforts to appeal to couch potatoes, e-sports enthusiasts and outdoor adventurers alike.

The Switch, a pricey console that can be enjoyed in the living room or on the road, needed a potential game-changer that would make video game enthusiasts willing to gamble on it. Nintendo needed something to create excitement and buzz.

Arms could fit that bill.

He praised the game’s mix of “bold mix of long-range, third-person combat played at a strategic pace far removed from the split-second timing and dexterous button bashing typical of the genre.”

Arms “is more than it seems,” he maintained. It’s “novel in a genre prone to repetition, and precisely the sort of pick-up video game the Switch was designed for.”

“Like Splatoon, I think Arms represents a fresh competitive title and new franchise that Nintendo can build up over months and years,” said Piers Harding-Rolls, head of games research at IHS Markit.

Arms plays to the strengths of the Switch console, he told TechNewsWorld, supporting local competitive play and use of its motion controllers.

“As a new IP, its attach rate at launch is likely to be lower than Zelda or Mario Kart, but I expect sales to continue to tick over, and for it to remain popular as adoption of Switch sales increases.”

Easy to Learn, Challenging to Play

The game centers around competition, which is driving much of the modern e-sports craze, and the response has been strong, said Jurre Pannekeet, senior market analyst at NewZoo.

“Arms seems to be a game that is relatively easy to pick up and play, quick to understand and learn — but it’s difficult to master with the nuances in fighting inherent to the game,” he told TechNewsWorld.

One such feature is “punching in an arc, bypassing an opponent’s defense, for which the movement-capturing accuracy of the controllers is praised,” Pannekeet noted.

While Arms likely will be played a lot online, much of the interest in the title will be driven by the ability to play via the local multiplayer co-op, which has made titles like Mario Kart, Mario Party and Super Smash Bros. Melee hugely successful, he added.

Arms “could be the next big hit that doesn’t include Nintendo’s traditionally popular characters, after Splatoon,” Pannekeet said.

The timing is critical for Nintendo to develop an exclusive title that can move market share, suggested Karol Severin, a gaming analyst for Midia Research.

Eighteen percent of all consumers own or regularly use a Nintendo console, including the Switch, according to Midia Research.

The company needs to build up its content catalog as it sets 2018 for the official launch of its paid subscription service, Severin pointed out.

“Switch, because of its console-mobile hybrid, will need more games that are developed with the hybrid format and its controls in mind,” Severin told TechNewsWorld, “in order to demonstrate the entertainment value of Switch to its full potential.”

If fans share the enthusiasm some of the early reviewers have displayed, Nintendo may regain its footing with one of its most important console rollouts in years.

“A game console lives and dies on the content,” observed Rob Enderle, principal analyst at the Enderle Group.

Nintendo “needs to do a great job with head-to-head games, and this title stands out as both fun and a good showcase for the company’s skills,” he told TechNewsWorld.

“With games like this, Switch has a fighting chance,” Enderle said.

The game is available for pre-order for $59.99 with an official launch date of June 16.