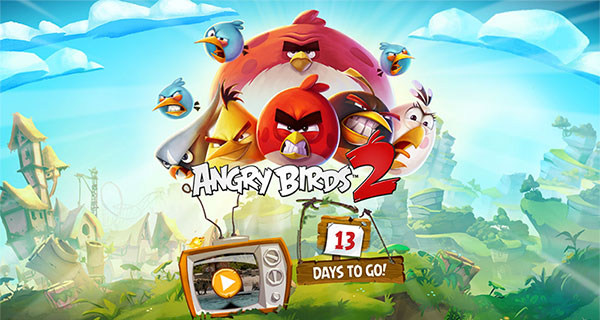 Angry Birds 2 — the 13th installment of Angry Birds and the original game’s first proper sequel — on Thursday became available for iOS and Android.

The free-to-play model is a call to players beyond its base. However, those new players may slip through developer Rovio’s fingers if the game’s features fail to motivate them to play with real money.

Though there are 12 titles separating the first game from Angry Birds 2, Rovio revisited every element of the core game except for the iconic slingshot used to fling furious fowl at snide little swine that hole up in glass houses and jury-rigged forts.

While the premise remains unchanged, Angry Birds 2 has its own feel. It takes advantage of modern multicore processors without burdening low-end handsets with overly ambitious graphics.

“With Angry Birds 2, we wanted to bring a level of expressive depth and detail seen previously only in a console game or animated series — and create a new game that kids and adults alike won’t be able to put down,” he said.

The potential is there for Angry Birds 2 to live at or near the top of app store charts.

That said, it’s not likely that even an evolved Angry Birds 2 has much — if any — potential to change hardcore gamers’ generally pessimistic perception of mobile gaming.

The mobile gaming market has no consistent business model. Smaller studios tend to offer the full-fat experience, while big-budget outfits appear willing to take a hit by letting gamers play for free.

Angry Birds 2 might offer a more rewarding experience if Rovio were to charge a flat fee for all of the rides in the park. With players offered just a few lives per half hour — along with the occasional option to watch an ad for a go at any level — it’s not hard to imagine that a surge up the charts likely will be followed by the drawn-out departure of those unwilling to pay or wait.

As for the action, each bird’s talent is more important than ever. Blue’s spread attack is ideal for breaking ice, Red’s dragon shout makes it even more of a general-purpose wrecking ball, and Chuck would chuck as much wood as it could if it weren’t for materials like ice and stone to repell its attack.

Pro tip: remember to let the destruction play out before launching the next bird.

The gameplay is augmented by spells, special attacks that soften up targets. There are ice attacks that make forts more susceptible to Blues, hot chili to turn an enemy into a time bomb, golden duck to rain hammers from the skies, and so on.

Pro Tip: Keep track of those chests, and consider holding off on using spells until you’re near one. Spells should be treated as aces up sleeves. Avoid using them during the first attempt at a level.

With its watercolor graphics and emotive style, Angry Birds 2 is a beautiful game. It’s considerably more prettied-up than the original.

There’s a slight disconnect between the characters — which feel flat compared to the deep idyllic backdrops on which they’re situated. It’s like Super Meatboy characters inserted into Ubisoft’s painterly UbiArt engine.

The disconnect between objects, characters and buildings helps players determine which structures should be demolished, however.

The game has a traditional board game layout with levels plotted along pathways through stages. There are challenges interspersed thoughout the stages, which offer players the chance to take on daily challenges to earn the in-game currency Rovio calls “gems.”

Inside the levels, the layout delivers a multi-stage presentation. There’s a rudimentary in-game minimap that shows you which stage you’re in.

Pro Tip: Stay aware of your position in the game. Even if you complete a stage, you’ll still need birds left to attack the next objective in the same level. If your last bird was used demolishing section two, for example, you’ll enter the next stage empty-handed and lose.

Angry Birds 2 is just innovative enough to deserve the title of a sequel instead of a cash grab. It’s a rich and entertaining game that deliver hours of gameplay, with more content promised.

The game has gotten off to a blazing start, but that momentum may be too hot to hold. Rovio has shown, through more than a dozen iterations, that it can churn out hit after hit from its Angry Birds franchise. It’s just that this hit may remain inside the park rather than becoming the home run Rovio has been seeking desperately.

Pro Tip: There are 12 other Angry Birds games, and Rovio probably doesn’t care which one you play.