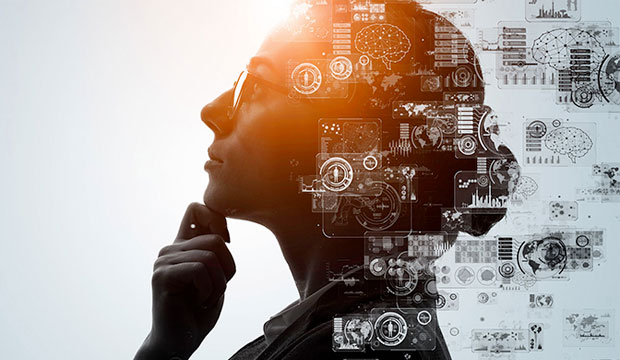 We are in the midst of what many are calling the Fourth Industrial Revolution, or Industry 4.0. This is a time of disruption, massive change, opportunities, and significant risks. Fortunes will shift, companies will fail, and new companies will rise from the ashes.

Like every revolution before, we will better understand what we can do, and likely do worse concerning work-life balance and family importance. There is also a significant risk for abuse and the loss of our humanity. This last could turn out to be a good thing.

This week, let’s talk about where we are in this latest Industrial Revolution and where we’ll likely be when this wave ends in 10 to 40 years.

We’ll close with my product of the week, a new conferencing camera/speaker solution from Poly.

The first Industrial Revolution started in 1760 and is believed to have ended 60 years later. It caused the birth of the middle class, professional jobs at scale, advancements in manufacturing tools (mainly in textiles), agriculture, and mining.

The second Industrial Revolution started in 1871 and lasted for about 43 years. It saw the birth of fast transportation (land and sea), wired and wireless communication, and electricity. Also, we had the emergence of production lines that massively accelerated how quickly and cheaply we could build products for both civilian and military use, which set an industrial foundation for two world wars.

The last Industrial Revolution, which started in the 1950s and ran for the rest of that century, saw the birth of computers, automation, functional robotics for manufacturing, and the digital age’s birth and maturity.

Each revolution had profound impacts on labor, power, income, wellness, and work-life balance. The first two revolutions arguably improved wealth distribution, eliminated most royalty, considerabley reduced slavery, and put power into the people’s hands in much of the world.

One could argue that the last Industrial Revolution undid a lot of that good. Wealth again migrated from the many back to the few, people gave up their power to companies and governments, and work-life balance declined for most sharply. However, it wasn’t all bad, as computing power led to better healthcare, longer life expectancies, improved job safety, greater access to information, and the end of world wars.

The problem with each revolution is they weren’t managed. Both the benefits and the harms emerged organically, and with each improvement, the capability to do good or ill was significantly magnified. If you think of technology as a lever, and, stealing from Archimedes, you could move the earth with a long enough lever. The Fourth Industrial Revolution promises to be one mother of a long lever.

The Fourth Industrial Revolution has been going on for a while now, arguably starting soon after the beginning of this century with the viable birth of artificial intelligence.

It brings with it the promise of advancements in blending humans and machines with mechanical organ and limb replacements, considerable advancements in machine intelligence (a term I think is more accurate than AI), flying cars, the rise of autonomous machines, massive instrumentation of the civilian population, and a world war. But this world war is a war on pollution and global warming, which is increasingly causing harmful weather events, rising oceans, and the polarization of world views.

It has also resulted in another huge problem that must be an immediate global need to get extended auto insurance protection (I swear if I didn’t get calls for this, my phone would rarely ring).

The joke on auto insurance aside, this Industrial Revolution will force us to reconsider who we trust for information, where human ends and machines begin, and visa-versa. It will also require we take a far closer look at work-life balance because we could end up being hardwired to computational resources, potentially having us on the job 24/7 if we aren’t careful.

Wondering about sleep? Recent breakthroughs indicate we could likely work while we sleep. Granted, we’ll need to work on dream quality because, in most of mine, I seem to be looking for cars in parking lots, classes I’m late for, or agonizing over tests for which I haven’t studied.

Robotic advancements are far farther along than most realize, ranging from advanced robotic pets and beasts of burden, to robotic weapons systems; not to mention artificial and quantum brains.

These developments, as they mature, will have significant impact on our lives. (I’m thinking of having my future robot take those damned car insurance calls!)

The level of disruption and danger with this revolution is unprecedented because we create things that can act with a purpose far more quickly than we can.

About half of all jobs are at risk of being automated during this latest revolution, and we are even building robotic mates (fortunately, they still need a ton of work). Even the concept of being a male parent has potentially become redundant (I suggest a conscious effort by men to treat women better before they collectively decide we are no longer needed).

We do have efforts to cool the earth, clean up ocean-borne plastics, and even move us to Mars if we screw up the planet. I still think that it might be better to fix the planet we are on, but what do I know?

I’ve just touched on a few of the changes. I haven’t talked about flying cars, our move from petro-chemicals to electricity, quantum computing, cyber risks, or space aliens, but what should you do to survive better what is coming?

First, I’d move away from areas on the coast or high human density. Global warming is resulting in rising water and increasing weather events where the land meets that water. Also, avoid areas where there are already extreme weather events and make sure your house is constructed not only to survive the weather of today but the weather as it likely will be in a decade or so.

Consider a forward-looking field that rewards remote work and where constant training is a part of the job. You don’t want to become obsolete in the middle of this mess. Pick naturally agile companies, have diversity at the top and the bottom, and pay more than lip service to corporate social responsibility.

Inventory your priorities and factor those into your decisions about family, where to live, what kind of job to do, and the nature of the company you work for or the business you build. Learn to embrace rather than fight change. It’s coming; you can’t stop it, so you might as well find a path to enjoy that change.

In short, you want to find a relatively stable island of enjoyment that you can preserve while recognizing stability will be impossible. Your goal is to limit the amount of change you’ll need to face so you can manage the unavoidable disruptions.

Get used to conservation and work on your antisocial behaviors. We will be in an increasingly connected and transparent world, and making sure you don’t have bombs in your digital history will help ensure you have a long and successful career.

One last thing: consider adopting the Flux Mindset, which is a way of dealing with massive change while maintaining a healthy attitude. You’ll need it because we are about to enter the period of this latest Industrial Revolution that will be the most disruptive in the world’s history. I expect it to be one hell of a ride.

We’ve been living on products like Zoom, Microsoft Teams, and Webex for nearly a year now, and I’ve been in the search for a better video camera. The Logitech Brio, which has been my go-to camera for years, gets horrible support from Logitech. Many of the Brio’s initial features, like advanced green screen capability, stopped working some time ago.

So I got excited when Poly contacted me to look at their new Poly Studio P15, their $599 high-end desktop video conferencing device. My initial impression is that while this camera/microphone/speaker system is expensive, it is the best desktop solution I’ve so far tested.

The tag line for this product is “look amazing, be amazing,” and it delivers. The whole point to a solution like this is to look good on camera, and you can adjust the settings to give yourself a little color, and it not only auto frames you, but it will also use AI to eliminate background noise. You can limit your field of view to hide the mess beside your desk, and it has built-in speakers which aren’t bad either.

This video bar sat just fine on my 49-inch Dell monitor, but it’s too big and heavy for a laptop. It has a built-in screw mount for a tripod, though, and I’d recommend that you use a tripod with a laptop. 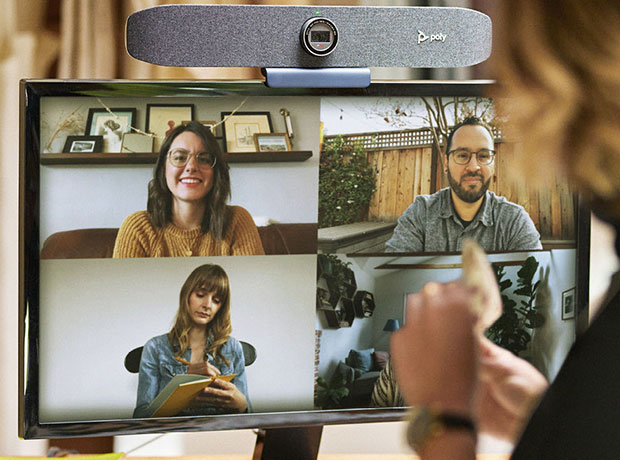 For this price you’d expect to get a good camera — and you do. It has backlight correction and a decent field of view, which is significant for self-centering. The app is pretty basic but does what is needed; and frankly, too many controls can lead to messing up the image, so I’m ok with it.

It’s missing some features that I expect to arrive in high-end cameras, like the ability to render you virtually, apply virtual makeup, or actively make you look younger and better, but no one does that right now.

The Poly Studio P15 is the best personal video conferencing camera I’ve yet seen, and if your appearance is essential, you should check it out. It is also my product of the week.