Amazon and Microsoft Take the Battle to Google

Last week was another big week for technology as Amazon announced a new line of Kindles and Microsoft released its Mango product into the wild. Many of us are thinking these products target Google’s gains and missed opportunities more than they do Apple’s. I’ll share my thoughts on the potential for these products and why Google, rather than Apple, may be the initial target.

I’ll also take a look at Mango and the Kindle Fire this week, and I’ll close with my product of the week: a really cool-looking — and sounding — pair of headphones with amazing bass.

“Mango” is the name of Microsoft’s latest release of, take a breath, the Windows Phone platform. Once you get by the name, which implies a user experience that defined the 90s (maybe this should be called “Microsoft Tiles”), you actually find an amazingly good product.

The hardware that will be optimized for this new operating system won’t arrive until late October, and it will likely be the Nokia line that is both the most complete and most interesting, because Nokia is making a “bet the company” gamble on this OS. In short, while Nokia may target Apple with its phones, this OS really is targeted at the independent OS market that Google currently owns.

Unlike Android, the Windows Phone (I’m calling it WP from now on) platform is tile- rather than icon-based, which makes it very different from iOS, rather than an inexpensive copy. It is far more efficient than either, and the Metro interface appears clearly designed to address shortcomings in the more-traditional Windows icon-based interface. Ironically, both iOS and Android look more like Windows than Mango does now.

Strange thing is the best thing about the WP platform is the one-button camera and the near-instant upload. This came to mind when I was watching some of the police abuses in New York last week, some of which appeared to target press reporters. That’s one button to launch the camera app, take a picture, and send it to the safety of the Web.

We’ll have to wait for the phones, particularly those from Nokia, to see if Apple should be worried. Right now, only Google needs to be concerned. This is because this offering is being marketed to the same group of folks who license the Android platform.

Hey even the guy who wrote the book on the Post Fact Society thinks this platform is hot.

Amazon Lights the Kindle on Fire!

Speaking of Google concerns, Amazon has announced the hardware and software surrounding its new Kindle Fire. At US$200 (which is about what my peers think this puppy costs to build), this is one hell of a tablet bargain. However, it forks Android, and Amazon is basically taking Google’s technology and making a better Android (it will even run the Netflix client).

I’m a huge Kindle fan, so I ordered one right away myself — but I recall that Android tablets haven’t done that well and that the only really successful one has been the Samsung Galaxy Tab. It’s pretty much an iPad knockoff — Steve Jobs personally tried to get Samsung to kill it (before suing them).

Samsung is so unhappy it’s working with Intel and Microsoft on Android alternatives (and also firmed up its image as the company that has never seen an operating system it didn’t like).

This new Kindle, which will show up in about a month, looks a lot like RIM’s PlayBook — but unlike the PlayBook, it has fewer hardware features and isn’t thought of as crippled. It’s somewhat ironic that a product with more features (like a built-in camera) is viewed as crippled. It amazes me how many folks don’t get the importance of strong marketing. “Didn’t Get Marketing” will likely be on RIM’s headstone.

In the end, the Kindle Fire is focused on being a front end to Amazon’s services, which have the potential to be stronger than Apple’s (this is Amazon’s business, after all) — and it pretty much will define the low end of the market, which is where the Google Android products have been trying to get a beachhead.

Because the iPad is a premium offering, the two products largely target different audiences. In use, the Fire is even more of consumption (as opposed to creation) device than the iPad is, also suggesting a different customer target. It will be better at movies and books, while the iPad will be better at displaying Web pages and doing light work.

At $200, the Kindle is more attractive as a gift, and the iPad likely will have a higher percentage of people who buy it for themselves. I doubt folks will want both a Kindle Fire and an iPad, but they may get a Kindle Touch and one or both of the others.

The best deal may be both a Touch and a Fire for less than an iPad, which gives you your best book and handheld media experience for about $150 less than the cheapest iPad and most Android tablets.

Folks do like deals, and two for one is a deal.

In the end, I think that the WP Mango product and Amazon’s Kindle Fire represent far more of a threat to Google than they do to Apple, initially. The first appears to be a better alternative than Android currently is, and the second basically usurps Google’s control over its own OS to build a better competitor. That second effort is far more embarrassing to Google and its model, because it makes the firm look like it is made up of idiots who can’t protect their own IP.

We still have the iPhone 5 showing up shortly, and the smart money says it will be an HSPA+ device, which means it will suck on Verizon. AT&T will get the advantage (and Verizon will get screwed). Word is that Apple is having serious problems with LTE chipsets, and this suggests that Tim Cook can’t get Apple folks to do the impossible like Steve Jobs did.

That means that the 4th quarter should be both exciting and interesting for those of who love to buy tech. Unfortunately, for some that is a Chinese curse.

I’m a sucker for military specification tech gear. Not that you’d ever take the V-Moda Crossfade M-80 headphones into battle, but these puppies are built like a tank. I get really tired of some of the tech I’m sent that seems to break down shortly after I’ve done a review on it. That won’t happen with these headphones, as they are designed to battlefield specifications (MIL-STD-810G) and have a two-year to lifetime warranty (after two years, you get 50 percent toward a new pair). 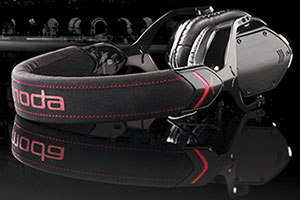 The first things you notice when you pick these up is that they are solid but they aren’t too heavy — and even the cables are Kevlar reinforced. They go over the ear and use noise isolation, not active noise cancellation (no batteries, but they don’t actively eliminate sound either). Better than earplugs on an airplane, but active noise cancellation gets rid of more ambient sound.

They come with a microphone cord so you can use them with your smartphone. They have a special cord for an iPhone so you can remotely control it (only pause worked on my Mango phone) and another cable with just the working pause button. They toss in a third cable that is audio only (no microphone for your phone).

One cool feature is you can order custom shields in colorsfor around $20.

The sound is amazing, though the depth and brightness of the sound is much better than the active noise cancellation headphones I used as reference. The bass is just amazing — never heard anything you can put on your head that has a low end like this (the reviews I’ve read agree that this is where they stand out).

They have a really cool True Blood version (adds red accents); the ones I got are Shadow Black (my personal preference).

At $249 on Amazon, they aren’t cheap (the True Blood version is on sale for $199 as I write this) — but if you are into quality, they are great deal. If you get a chance to try them out, you should.

I’m using them as I write this and, seriously, the sound is amazing. That is why the V-Moda Crossfade M-80 headphones are my product of the week. Now excuse me, I’m going to go listen to some tunes.

Is Amazon Shopping for WebOS?