WHICH APPS DO I NEED?

It’s almost like we’re going backwards. What with the escalating price-gouging by mobile networks for wireless data on the move, it still behooves us to use WiFi hotspots whenever possible. Who’d have thought we’d still be using public WiFi in this now 4G-enabled world?

The answer, however, is that we are, like it or not, and most likely will be for the foreseeable future.

In this week’s All Things Appy column, we take a look at the must-have, free WiFi helper apps for the Apple iOS ecosystem: Some finders, a tool to help you stay safe out there, and an app to help you find hotspots you may not have known you had access to.

About the Platform: Apps are found in the Apple iTunes store. Browse to the store from your device and then search for the app you want to download.

Free WiFi Finder is rated 2 1/2 stars out of a possible 5 stars for all versions based on 147,207 ratings, and 4 stars out of 5 for the current version based on 891 ratings in the iTunes App Store.

This app from longtime global hotspot directory provider JiWire uses the phone’s GPS and other location services to tell you where you can find free and paid WiFi hotspots. 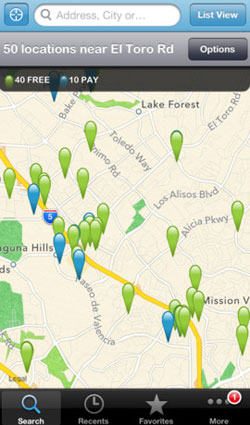 You can filter your search by location type, like “coffee joint”; it also works offline if you download the update while still connected, so you should be able to determine your next hotspot.

VPN One Click Professional is rated 4 stars out of a possible 5 for all versions based on 566 ratings, and 4 1/2 stars out of 5 for the current version based on 373 ratings in the iTunes App Store.

Secure your public WiFi session with this highly rated, powerful Virtual Private Network app. VPNs create an encrypted tunnel through the Internet and network and help alleviate privacy hijacks prevalent in public networks — like when passwords are lifted electronically by snoopers nearby.

While the app is free, you do need to buy some service with it at US$1.99 a month. Some fees are customary for any robust VPN.

Supplement your hotspot arsenal with a communications app and cut out the mobile carrier altogether. Viber lets you communicate via voice, video and text with fellow Viber users.

Push notifications are designed to make sure that you don’t miss messages even when out of the coffee shop and offline.

My Data Manager is rated 4 1/2 stars out of a possible 5 for all versions based on 2,641 ratings, and 4 stars out of 5 for the current version based on 368 ratings in the iTunes App Store.

Mobidia’s My Data Manager app allows you to monitor your data usage over both WiFi and mobile networks over time. It also lets you see what services — like streaming clients, for example — are using the most data.

Use the app to budget paid data and to plan intensive downloading when off the cell network — like on WiFi.

TWC WiFi Finder is rated 2 1/2 stars out of a possible 5 for all versions based on 193 ratings, and 3 stars out of 5 for the current version based on 12 ratings in the iTunes App Store.

U.S. cable Internet providers have banded together to create a little-known but widespread urban cross-ISP roaming network of hotspots called CableWiFi that can be accessed through authentication of a cable subscription. They use street-side cabinets and other existing infrastructure to cheaply value-add your cable service.

Included roaming providers include Cox, Time Warner Cable, Xfinity and others. Some, like this poorly reviewed one from TWC, have iOS apps that will suggest locations. It’s a lame implementation of an app, but you’re paying for those hotspots in your cable subscription, so use them.

Want to Suggest an Apps Collection?

Is there a batch of apps you’d like to suggest for review? Remember, they must all be for the same platform, and they must all be geared toward the same general purpose. Please send the names of five or more apps to me, and I’ll consider them for a future All Things Appy column.

Don’t forget to use the Talkback feature below to add your comments.