WHICH APPS DO I NEED?

A few weeks back All Things Appy covered some of the best, must-have free utilities for the Android mobile environment.

This time, we look at requisite keyboard, antivirus, backup and download management apps to supplement the battery management, task killer, storage analyzer and monitoring tools that we’ve looked at previously.

About the Platform: Google’s Android OS apps can be found in Google’s Play Store. Browse to the Play Store — you’ll find it in the mobile device’s app drawer. Then search for the app.

This app swaps your device’s keyboard for one that predicts what you want to type. SwiftKey is one of the most popular apps for Android. It cleverly works by learning how you use words together, rather than simply guessing individual words, as is common with other predictive keyboards. 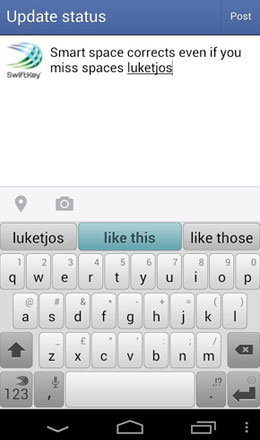 Added benefits include cloud syncing and Swype-like glide typing. A month is free and then SwiftKey hits you up.

It’s probably only a matter of time before viruses and malware become prevalent in the Android environment. Conveniently, AVG, the popular desktop virus-beater, has a free Android version. It’s worth advance installing it for protection, but AVG has also come up with a bunch of added features, including lost-phone location via Google Maps and a device wiper.

This app requires root, a type of device-unlocking customization that some of the more geeky of us perform when we acquire a new device. So don’t bother with this app if you don’t have root — but if you do, this is the must-have app for backing up your tablet or phone.

All settings, installed apps and features back up on a schedule, making flip-flopping to alternative devices super-easy.

Android has restrictions on the kinds of files that you can download, and this app simply removes many of the handcuffs.

If you’ve run into issues downloading APK, DOC, MP3, RAR, XLS, ZIP and other files, this app will sort it out. It also allows many Gmail attachment downloads as well as downloads to an SD card.

Though not strictly conforming to our operating system-oriented utility category, we have to include Smart Flashlight because of its simple brilliance. This app allows you to switch on your phone’s LED — the light on the back that’s used for flash photography — and use it as a flashlight.

It’s a must-have for anyone who has ever peered at a menu in a dimly lit restaurant or had an unexpected walk from the car in the dark.

Check out some of Smart Tools’ other free apps, too. They include a compass, tape measure, mirror and metal detector. Fun stuff.

Want to Suggest an Apps Collection?

Is there a batch of apps you’d like to suggest for review? Remember, they must all be for the same platform, and they must all be geared toward the same general purpose. Please send the names of five or more apps to me, and I’ll consider them for a future All Things Appy column.

Don’t forget to use the Talkback feature below to add your comments.