AI Playmate Cozmo Wants to Get to Know You 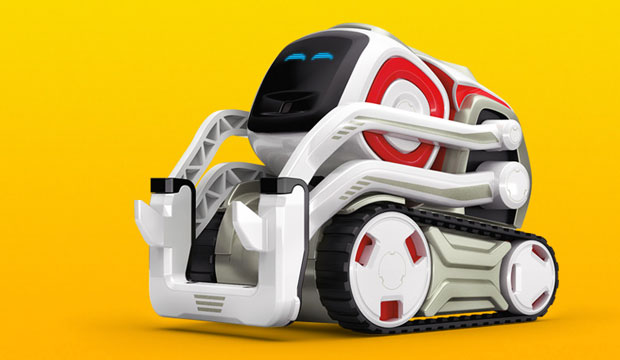 Anki on Monday introduced Cozmo, a little robot powered by an advanced artificial intelligence. Cozmo promises to be far more interactive than any toy robot that has been released to date.

Although the multidisciplinary team of roboticists, animators and game developers who designed Cozmo had play in mind, they noted that the combination of technology from toys, videogames and robotics represents a major leap forward. Anki’s three creators all got their start at Carnegie Mellon’s Robotic Institute.

Cozmo, which can nestle in the palm of your hand, has a “brain” — technically its CPU — that can process more data per second than all the Mars Rovers combined, his makers said. In addition, Cozmo has a playful personality. He’s designed to react to emotions and even nudge users to play with him.

“The robotics and AI technology that goes into Cozmo has made him vastly different than other consumer robots on the market,” said Anki spokesperson Peter Nguyen.

“Cozmo’s size, personality and smarts are what set him apart,” he told TechNewsWorld. “He’s mischievous, charming, unpredictable and — most importantly — fun.”

Cozmo is now available for preorders for US$179.99; he will ship in the United States in October.

Cozmo is not the first interactive toy to reach the market — nor is it the first robot toy. What sets Cozmo apart from the “smart toys” of the 1970s, 80s and 90s — such as Speak & Spell, Teddy Ruxpin or Furby — is that it could have greater play value than those toys, which can become repetitious all too quickly.

“Every interaction with Cozmo is different, so you do not endure repetitive play patterns and responses typically found with other preprogrammed robots,” explained Nguyen.

Because it has functionality that echoes video game design, Cozmo also can receive regular updates, which could extend its playability.

Still, Anki has designed this toy to be just that: a toy. It’s not an advanced computerized robot. Its software is app-based, so Cozmo’s games and other functionality could become as compelling as other simple app games and programs.

“Cozmo is a product where hardware meets software, which gives us the ability to continuously update the experience by launching additional content over time,” added Nguyen. “Even though Cozmo is high-tech, he’s not technical, and there are no parts to put together. He’s self-charging and ready to go out of the box, so all you’ll need is a compatible iOS or Android device.”

Cozmo lacks the “traditional” human-like robot form factor of bipedal legs, arms and a head. Instead, he looks more like such modern takes on robots as Pixar’s WALL-E. In other words, he is less C-3PO and more R2-D2 and BB-8 — more proof that a robot doesn’t need to fully emulate a human to develop a connection with a human user.

Still, Cozmo does feature an OLED screen/face that is embedded with blue eyes — which in fact were designed by a Pixar animator to help it connect with its user.

Cozmo doesn’t speak, so there are no recorded lines. Instead he plays music and emits “robotic” sounds. These design features should help users embrace Cozmo and regard him less as a machine and more as an interactive toy.

“It’s hard to know exactly what the implications are of having such a lifelike robot as a toy,” he told TechNewsWorld.

“Cozmo is designed to dynamically interact with its surroundings — including people. It should enable play activities that are several steps beyond passively interactive toys like Tickle Me Elmo and action figures,” added Charles King, principal analyst at Pund-IT.

“Cozmo might also encourage kids to learn more about technology or even inspire them to try programming and similar studies,” he told TechNewsWorld.

“Certainly, kids have grown attached to far less realistic dolls — Barbie and Raggedy Ann being just a couple that come to mind,” Endpoint’s Kay added. “The upside is that kids might take up an interest in AI and robotics.”

As with video games and other “interactive” toys, a robotic friend could discourage users from engaging with other people.

“They might become more antisocial if their relationship with Cozmo is more satisfying than those with real people,” cautioned Kay.

“There are already concerns about how distracted modern kids are and how well — or badly — they socialize with their peers and others,” added King.

“If Cozmo is truly as interactive as its makers and promoters claim, it could simply become a highly effective distraction made for an audience that’s already problematically distracted,” he warned.

Yet this technology does have promise to be more than a toy.

“It’s a pretty cool invention and might have further application, for example in elder care,” suggested Kay.

“What’s particularly interesting to me is how Cozmo’s creators are utilizing owners’ smartphones to wirelessly provide the robot additional cognitive horsepower,” observed King.

“It’s akin to what Apple accomplished by tying Siri to the cloud, and should provide a template for developing a wide range of AI-based interactive devices,” King explained. “Technologically, Cozmo may begin its life in the playroom, but it wouldn’t be surprising to see it find its way into the wider world.”