Digital cameras have been around for so long that for some shutter buffs, it’s difficult to remember a time when they didn’t exist. It’s even more difficult to recall the days when a slide projector was a necessary accessory for an image-grabbing hobbyist. 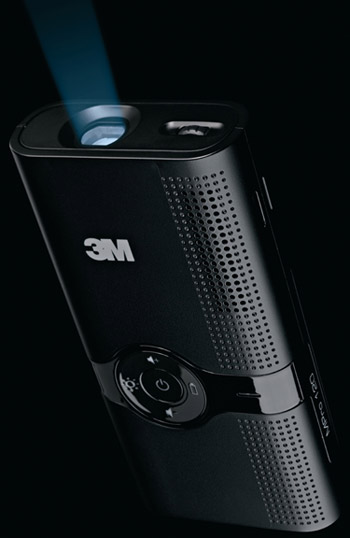 Projectors, though, may be poised for a comeback. We’re not talking about the boxy heavyweights from the days when 35 millimeter slides were king, but a new wave of small, compact offerings that fit in the palm of the hand. One such projector is 3M’s MPro120 pocket projector (US$299-$350).

The MPro120 is the kind of gadget that’s irresistible to gizmo lovers. It’s a little bigger than an old microcassette recorder, simple to set up and use, lightweight at 5.3 ounces and capable of displaying an image from eight to 50 inches, measured diagonally, on any surface. White, reflective surfaces, though, yield the best results.

Most of the unit’s controls are located on top of the device. A power button is situated there surrounded by a ring. Pressing the ring at 12 and six o’clock increases or decreases the projector’s volume. At nine and three o’clock are controls for increasing the unit’s brightness and checking its battery life.

At the bottom of the MPro120 is a port for input from a VGA device, such as a laptop or a gadget with audio-visual output — a digital camera, camcorder or media player.

At the front of the projector is its lens and a dial for focusing it. On its posterior is a standard tripod mount. A Gorillapod-type tripod is included with the projector so it need not be held while displaying content on a surface.

A panel below the tripod mount slides off the device to reveal its battery compartment. A lithium polymer battery is packaged with the product. It takes about two hours to charge and provides from two to four hours of battery life.

In the box with the MPro120 are a number of cables and adapters to make the unit immediately useful as soon as its battery is charged.

There’s an AC power adapter with multiple heads to accommodate a variety of wall outlets. The heads plug into the AC adapter and secure themselves to it with a twist.

There’s a video cable. One end plugs into the A/V port; the other end has three RCA connectors — red, yellow and gray.

If the device you’re connecting the projector to has RCA inputs — a camcorder, for instance — you can connect the cable directly to it. Some gadgets, though, don’t have those inputs. For those devices, 3M includes three adapters that allow the connectors on the cable to connect with the RCA connectors from the other device.

There’s also a VGA cable that allows video output to be sent from a device, such as a laptop, to the projector.

While the array of cables and adapters 3M packages with the MPro120 is impressive, iPod users will find the collection disappointing. That’s because the cable for connecting an iPod, iPod Touch or iPhone to the projector must be purchased separately. The same is true for the automobile adapter for running or charging the unit in a car.

Although simple by nature, the MPro120’s documentation is a bit skimpy. It has a “quick start guide,” and that’s it.

Picture quality from the projector was good. As might be expected, the smaller the projected size, the brighter the display.

The unit also has its own speakers, which won’t awe an audience in a conference room, but are satisfactory in more intimate settings.

Overall, the MPro120 is a solidly designed product that’s engineered for the kind of intuitive user experience that produces smiles right out of the box.

Whether or not micro projectors like the MPro120 will become as ubiquitous as the carousel projector only a Don Draper may know, but they’re certainly more fun and less of a hassle to use.

*ECT News Network editor’s note – Jan. 25, 2010: Our original publication of this article incorrectly stated the dimensions of this product and its predecessor as 4.72 by 2.3 by 0.09 inches versus 4.5 by 1.9 by 0.08 inches.
Get Permission to License or Reproduce this Article